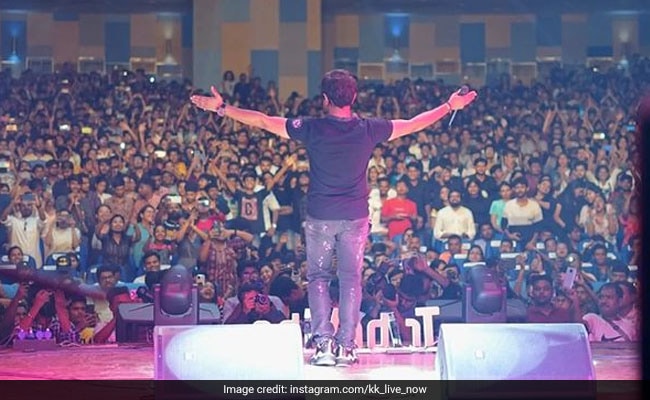 Singer KK's last post on Instagram yesterday has been flooded with messages from grief-stricken fans. KK died last night after his concert; he collapsed in his hotel and was rushed to a Kolkata hospital. The 53-year-old singer died on the way. Earlier that day, KK had posted pictures of himself in concert; the location tag is Nazrul Mancha auditorium, his concert venue in Kolkata. The photos show the late singer on stage in front of a cheering crowd. "Pulsating gig tonight at Nazrul Mancha. Vivekananda College !! Love you all #KKLive #KKTeam," reads the caption of the post. The photo credit is to KK's manager Shubham Bhatt.

The comments section is filled with messages from KK's shocked fans. "I am still in disbelief," read one comment. "Can't believe this," read another, "I'm numb and heartbroken." Many comments read simply, "RIP."

Before jetting off to Kolkata, KK shared a group selfie with his band members on his Instagram handle and captioned it as "Enroute Kolkata selfie! #KKLive #KKTeam":

West Bengal Chief Minister Mamta Banerjee has announced that the state government will give a gun salute at the Kolkata airport to honour the singer, news agency ANI reported.

KK is the voice behind any number of beloved melodies, among them Pal and Yaaron Dosti - two songs that struck a chord with young fans and are commonly played at school and college farewell events. The evocative Tadap Tadap from Hum Dil De Chuke Sanam is among KK's bet-loved Bollywood songs. He also sang in several languages other than Hindi, including Tamil, Telugu, Bengali, Marathi and Kannada.