"Exactly a year ago I started my spiritual path on International Yoga Day," wrote Raj Kundra 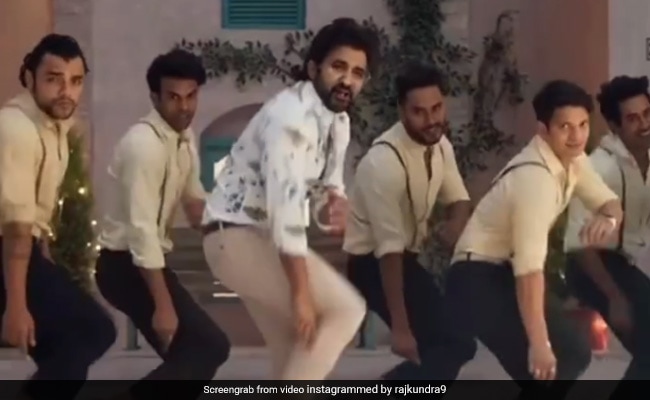 Raj Kundra in a still from the video. (courtesy rajkundra9)

Raj Kundra has become quite the expert at spreading cheer on Instagram. The businessman often shares images and videos of his beautiful family on his social media accounts, giving fans a glimpse of his life with his wife, actress Shilpa Shetty  and their children. However, we have to say that Raj's hilarious video edit collection has a separate fan base of its own. These fun clips involve Raj swapping the faces of actors from iconic scenes with his own and sharing them with a chuckle-inducing caption. This time around, the actor decided to celebrate International Yoga Day with an edit of the blockbuster Telugu song Butta Bomma.

In the video, Raj  has swapped actor Allu Arjun's face with his own and it is no surprise that the clip features some killer dance moves. The day also marks one year since Raj turned vegan and he attached a note about his experience along with the video.  He wrote in the caption, "It feels good to be celebrating one year of being Vegan! Exactly a year ago I started my spiritual path on International Yoga Day of becoming Vegan and waking up at 5 am daily for meditation. This past year has brought calmness and clarity into my life. It feels good to be able to say my food is grown not born. Happy International Yoga Day yoga."

Interacting with his fans, he further added, " What positive changes are you making today for a better YOU?" Followers of the entrepreneur loved the edit and left fire emoticons in the comment section.

Just a few days ago, Raj also shared a video where he swapped the faces of characters, The Professor and Tokyo from the series Money Heist with that of his and Shilpa's. In an added twist, the original dialogues were also replaced by Punjabi lines. In the clip, Shilpa is seen asking how one could tell whether a man is married when he does not wear a mangalsutra. To this, Raj says that the man's marital status would be evident from the grief on his face.

Sharing this video, Raj wrote, "Finally a Punjabi couple in Money Heist!! Woohoo Bella Ciao. The Punjabi dialogue translates to Her - when an Indian woman is married you know by her mangalsutra how do you know when an Indian man is married? He - By seeing the sorrow on his face."

Take a look at some of the other funny videos that Raj has shared:

Shilpa Shetty married businessman Raj Kundra, in 2009. The couple has two kids, Viaan Raj Kundra and Samisha Shetty Kundra. Shilpa is best known for her work in films such as  Main Khiladi Tu Anari, Dhadkan, Baazigar, and  Life in a... Metro.