Sanjay Dutt paid a tribute to Bapu with a clip from his 2006 film Lage Raho Munna Bhai, which ends with these words attributed to Mahatma Gandhi: "Darr hi sabse bada rog hai 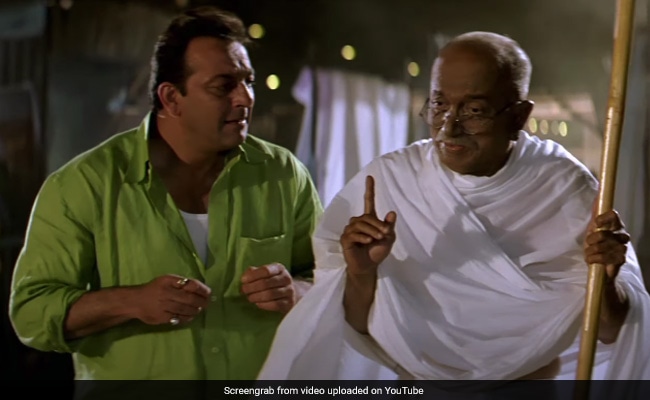 For Bollywood movie buffs, watching Lage Raho Munna Bhai is perhaps the best way to celebrate Gandhi Jayanti and actor Sanjay Dutt just reminded us that. While several celebrities are sharing quotes and teachings of Mahatma Gandhi on his 151st birth anniversary, Sanjay Dutt chose the filmy way. He paid a tribute to Bapu with a clip from his 2006 film Lage Raho Munna Bhai, which ends with these words attributed to Mahatma Gandhi: "Darr hi sabse bada rog hai. (Fear is the biggest disease)". "Happy Birthday Bapu," wrote Sanjay Dutt, who is currently undergoing treatment for health issues. Mr Dutt hasn't shared details about his medical condition but has announced he's on a break from work.

Lage Raho Munna Bhai is the second instalment and so far the last in Rajkumar Hirani's Munna Bhaiseries of films. Sanjay Dutt reprised his role as the daredevil Mumbai don named Munna Bhai, who lost his heart to a radio jockey named Janhavi. Munna Bhai, in order to impress Janhavi on her radio show on Gandhi Jayanti, reads up an excessive amount about Gandhi, which leads to hallucinations, which he believe to be true. Munna Bhai's ROFL implementation of Gandhi's non-violent ways in real life forms the high points of the movie. Rajkumar Hirani, in several interviews, has said that the objective behind infusing the movie with a strong Gandhi element was to rekindle interest about the celebrated personality, who changed the course of India's history.

Meanwhile, Sanjay Dutt has returned to Mumbai after briefly spending time with his family in Dubai. Last month, was spotted visiting Mumbai's Kokilaben Hospital a few times, where he was believed to be going for treatment.