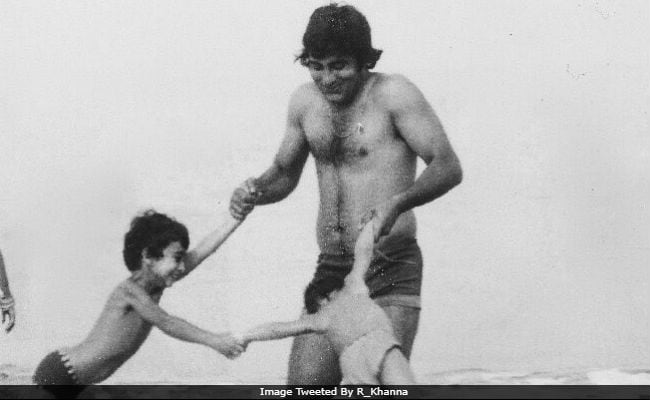 New Delhi: Actor Akshaye Khanna turns 43 today (March 28). On his birthday, brother Rahul Khanna posted a wonderful picture of both of them with their father Vinod Khanna, who died of cancer last year. The picture features Akshaye and Rahul as two little boys, happily perched on their dad's arms. "A blast from the past on baby bro's birthday! #Akshaye #SiblingRevelry," Rahul captioned the post. A woman also features in the photo and appears to be Vinod Khanna's first wife Geetanjali. (Thank you, Rahul, for such a wonderful picture). Rahul is Vinod Khanna and Geetanjali's elder child while Akshaye is the younger one. Both are actors, just like their late father.

Take a look at the picture.

A blast from the past on baby bro's birthday! #akshaye #siblingrevelry #

Rahul Khanna has earlier posted some old pictures with Vinod Khanna. After Mr Khanna's death, he shared a picture of himself and Akshaye with the superstar and wrote, "Feels like yesterday."

"You showed me how to be a gentleman and yet fight to the finish like a warrior. Bye, dad," he wrote making us teary-eyed.

Love this image of my dad, brother & me from the @FilmfareOfficial archives! (More on my Twitter: R_Khanna)

Promoted
Listen to the latest songs, only on JioSaavn.com
This old picture of Vinod Khanna was also posted by him. "Serious swagger goals. Dad, 1966, screen test for Man Ka Meet," he captioned the post.

Akshaye Khanna made his acting debut in 1997 with Himalay Putra and later starred in films such as Border, Aa Ab Laut Chalen, Dil Chahta Hai, Hulchul and Humraaz. Last year, he starred in late actress Sridevi's MOM and in Sonakshi Sinha and Sidharth Malhotra's Ittefaq. Akshaye's next film is The Accidental Prime Minister.