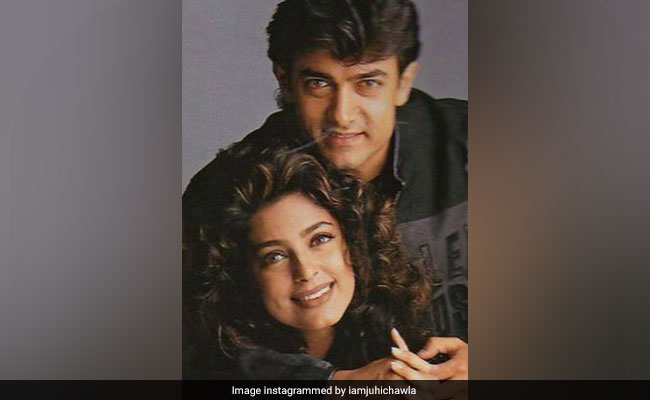 As Aamir Khan blows 54 candles on his birthday cake, the actor's fans and colleagues have posted birthday wishes on social media, expressing their love and shared some of the cutest messages for him. However, the birthday wish that stole our hearts is the one posted by Juhi Chawla. Juhi, who co-starred with Aamir in several films in the Eighties and Nineties shared a throwback picture of herself along with the birthday boy. Juhi captioned the post: "Aammmiirrrrr! Happy Birthday! Have a super duper day and make another fabulous film this year." Aamir has not reacted to Juhi's post as of now but we would love to see the actor's response. Meanwhile, take a look at the post here:

Madhuri Dixt's birthday wish for Aamir was equally cute. Much to fans' dismay, the Kalank actress did not share a throwback picture, but she recalled the time when Aamir used to play pranks during the shooting of the film Dil. Madhuri, who also shared screen space with Aamir in Deewana Mujh Sa Nahin, tweeted: "I still remember you pulling a prank on me while shooting for Dil. Remembering those fun moments and many more on your birthday dearest Aamir. Wishing you a fantastic day ahead. Stay blessed!"

I still remember you pulling a prank on me while shooting for #Dil. Remembering those fun moments and many more on your birthday dearest @aamir_khan! Wishing you a fantastic day ahead. Stay blessed!!

Preity Zinta shared a throwback picture of herself with Aamir, from the 2001 film Dil Chahta Hai. She commented: "Happy Birthday to my dear Aamir Khan. Keep smiling, keep shining and always be the awesome Mr Perfectionist. Loads of love always.

On his 54th birthday, Aamir Khan announced his next Bollywood project, which is titled Lal Singh Chaddha. The film is based on Tom Hanks' classic film Forrest Gump and in order to prepare for his role in the film, Aamir will lose about 20 kgs.