On A Scale Of 1 To Ishaan Khatter, How Many Of These Workout Routines Can You Do?

"Playtime but I ain't playing," Ishaan Khatter captioned the post 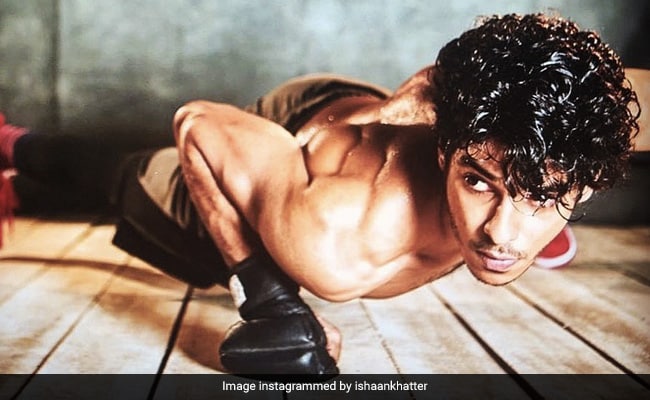 We are impressed, Ishaan Khatter. The Dhadak actor shared a video of his intense workout routine on his Instagram profile on Sunday and we can't help but feel inspired. The actor posted a video on the photograph sharing application, in which he can be seen doing animal flow, crunches, rock climbing, working out with gymnastic rings, pushups and lunges with utmost ease. The actor makes all the drills look so easy. He captioned the post: "Playtime but I ain't playing." In the comments section of his post, Ishaan's Phone Bhoot co-star Siddhant Chaturvedi wrote: "Wow," adding a fire emoji. "Miss you dost," Ishaan replied to the comment.

Without much ado, take a look at Ishaan Khatter's post here:

Ishaan Khatter has managed to set major fitness goals for his Instafam on several occasions. Check out some of the posts here, you can thank us later:

Ishaan Khatter, son of Rajesh Khattar and Neelima Azeem, made his acting debut with Beyond The Clouds, which was directed by Majid Majidi. He then starred in Dharma Productions' Dhadak in 2018, which marked the debut of late actor Sridevi's daughter Janhvi Kapoor. Last year, Ishaan starred in Khaali Peeli with Ananya Panday, which released on the streaming platform ZeePlex. He also featured in Mira Nair's web-series A Suitable Boy, co-starring Tabu.