Oh, Nothing. Just Some New Pics Of Suhana And Shah Rukh Khan From Family Wedding

Suhana Khan looked absolutely stunning at the wedding in Delhi, the pictures of which are being circulated on social media from December 31 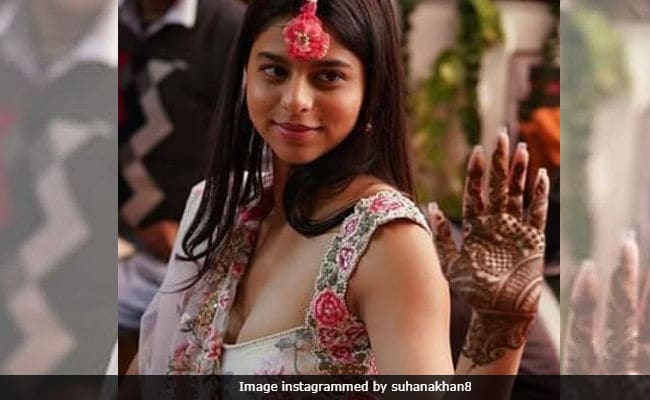 New Delhi: Social media is obsessing over a new picture of Shah Rukh Khan's daughter Suhana from a family wedding in New Delhi. Suhana, dressed in a floral printed soft pink lehenga by Seema Khan and matching phool maan-tikka, is winning the Internet. There's a new picture of Suhana and Shah Rukh Khan from a different day of the wedding festivities, which is going viral - in this, Shah Rukh and Suhana posed in a dramatic fashion (or are they getting ready to get a picture clicked?). Pictures of Suhana from the Delhi wedding rocked the Internet on December 31 and now again, today.

See viral pictures of Suhana and Shah Rukh Khan from the Delhi wedding:

A picture of Suhana, shared by Seema Khan:

Here are some other pictures shared by fan clubs earlier:

This video of Suhana after the completion of eye make-up is all of us:

Suhana is Shah Rukh and Gauri Khan's only daughter and second of their three children. Suhana's elder brother is Aryan, 19, who is currently pursuing a course in films in California. Her younger brother is five-year-old AbRam. Like Aryan, Suhana also wants to make a career in films but only after completing her studies, as revealed by Shah Rukh Khan. SRK told Femina that he's okay with Suhana becoming an actor "if she has the passion and guts to work five times harder than me and get paid 10 times less than I do."

Several clips of Suhana Khan's theatre performance have found its way to the Internet earlier and even National Award-winning actress Shabana Azmi tweeted: "Mark my words Suhana Khan is going to be a seriously good actor. I've watched a short clip of her acting and it was terrific. Bless her."