"Thanks for always patiently taking and editing my photos," Shanaya Kapoor wrote for Khushi 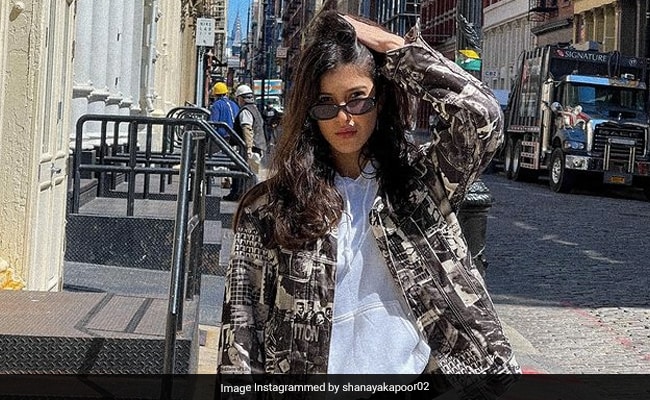 Shanaya Kapoor is making New York look fabulous in these throwback photos. On Flashback Friday, Shanaya revisited some of her favourite memories from her trip to the Big Apple, where she caught up with her cousin Khushi. For her latest post, she assigned photo courtesy to Khushi and dedicated this cute message: "Thanks for always patiently taking and editing my photos, I love you." In Shanaya Kapoor's New York postcard, she can be seen posing in New York's SoHo and her street style is absolutely on point. Shanaya paired black pants and a baggy sweatshirt with a loose jacket to give her a casually chic look.

Here's how Shanaya Kapoor was being fabulous in New York:

Khushi Kapoor had flown out of Maximum City on September 2019 for destination Big Apple, where she studies films. Khushi is currently in Mumbai.

Shanaya Kapoor is yet to make her Bollywood debut but she's already a star on Instagram. Shanaya made her debut at the Le Bal in Paris in 2019. However, she has also already joined Bollywood but not as an actor but as an assistant director for Netflix release Gunjan Saxena: The Kargil Girl, which stars Khushi's elder sister Janhvi Kapoor in the lead role. Shanaya also featured in bits and pieces on the Netflix show Fabulous Lives Of Bollywood Wives. Shanaya recently announced the big news about her Bollywood debut - she is all set to be launched by Karan Johar's Dharma Productions.

Trending: Salman Khan's Response To Troll Who Said "Want My Money Back"