Nothing To See Here, Just A Pic Of Neetu Kapoor "Twinning" With Daughter Riddhima 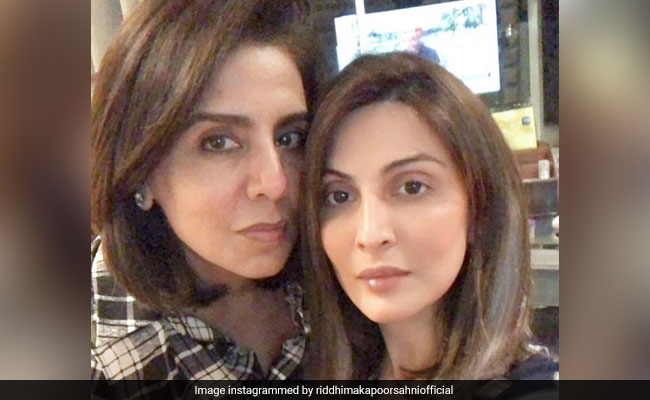 Rishi and Neetu Kapoor's daughter Riddhima Kapoor Sahni's latest post on Instagram will give you major mother-daughter goals. Riddhima, who is currently living with mom Neetu in Mumbai, added a new photograph to her family album and we can't get enough of it. In the new picture, Neetu and Riddhima can be seen "twinning" in checked shirts and sporting similar hairstyles. The duo can be seen posing for a selfie. Sharing the beautiful mother-daughter moment, Riddhima didn't write much and captioned her post like this: "Just us. #twinningwithmommy." She also used heart emoticons in the caption. Check out the post here:

A post shared by Riddhima Kapoor Sahni (RKS) (@riddhimakapoorsahniofficial) on Jun 2, 2020 at 7:38am PDT

In her previous post, Riddhima paid a tribute to Rishi Kapoor a month after his death. She shared a picture of him and accompanied it with a few lines from Maya Angelou's poem A Great Soul. "We love you, Papa," read the last part of her caption. Take a look:

"A Great Soul" by Maya Angelou "A great soul serves everyone all the time. A great soul never dies. It brings us together again and again." We love you Papa

Rishi Kapoor died in Mumbai on the morning of April 30. Riddhima, who lives in Delhi with her husband, couldn't attend her father's final rites due to the lockdown regulations. She was then granted permission to drive to Mumbai from Delhi to be with her family.

Riddhima is said to have attended Rishi Kapoor's prayer meet at home on May 2. She immersed her father's ashes in Mumbai's Banganga along with brother Ranbir and mom Neetu the next day in the presence of a few close friends including Alia Bhatt, who is Ranbir's girlfriend, and filmmaker Ayan Mukerji.