For the caption, Jr NTR wrote, “Moments like these” 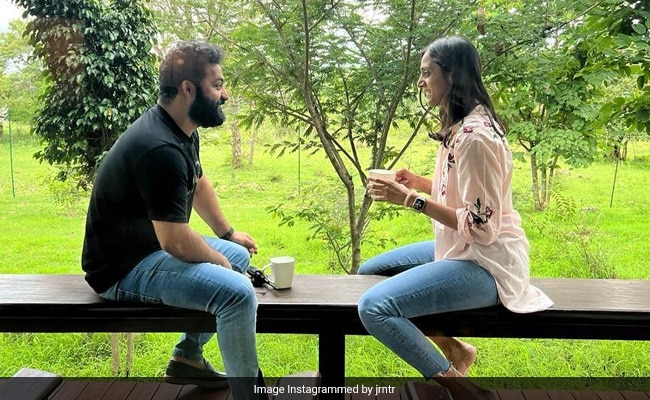 RRR actor Jr NTR has shared a cute picture with his wife Lakshmi Pranathi. The South star, who rarely posts on social media, has dropped the picture-perfect moment on Instagram. Jr NTR and his wife are sitting on a bench amidst the beautiful surroundings. The two are just casually sitting face to face and having a conversation. But not without their cups of hot beverage. The picture screams love from miles away. For the caption, Jr NTR wrote, "Moments like these...."

On May 5, Jr NTR and KGF director Prashanth Neel celebrated their wedding anniversaries together with their wives Lakshmi Pranathi and Likitha, respectively. Jr NTR also shared pictures from the mini anniversary party on Instagram. Along with the pictures, Jr NTR wrote, “When you share anniversaries, it calls for a celebration...”

Jr NTR and his wife Lakshmi never fail to give us some major family goals with loved-up pictures. On Holi, the actor shared a cute family picture featuring himself, Lakshmi and their children - Abhay Ram and Bhargav Ram. The happy family pose for a selfie with faces smeared in colours.

Jr NTR was last seen in SS Rajamouli's RRR. The film has broken several records at the box office. Ram Charan, Alia Bhatt and Ajay Devgn were also part of the film.

Jr NTR will next feature in Prashanth Neel's NTR 31. This is the first time that the two are collaborating on a project. On working with Jr NTR, Prashant Neel told Pinkvilla, "I have been a fan of NTR for the last 15 to 20 years. We have met 10 to 15 times just casually before we even started the script work. I wanted to understand him a little more and that's my process with all my actors."