Not A Drill - Ryan Reynolds And Hugh Jackman Call 24-Hour Truce, All For Lemonade

"I've agreed to trust that Ryan can hold his tongue for one day. A (very) temporary cease-fire for the All In Challenge," Hugh Jackman 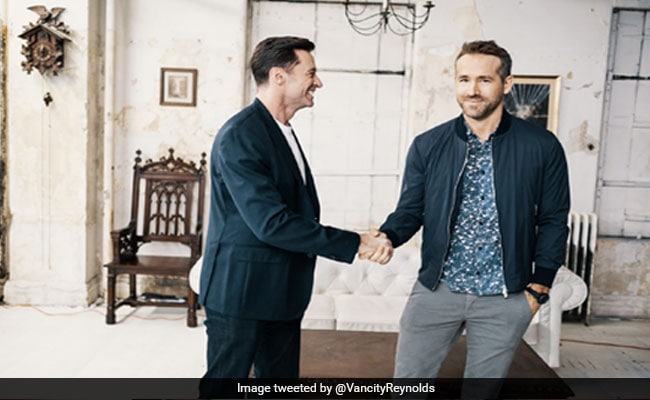 Frenemies Hugh Jackman and Ryan Reynolds' crazy and entertaining social media feud will have to take a break, guys. For once, they have decided to be good to each other. Hugh Jackman and Ryan Reynolds, off screen versions of Wolverine and Deadpool, have been at war for over five years now but they have issued a "(very) temporary cease-fire" on their ongoing feud to participate in the All In Challenge to help raise funds for those affected by the coronavirus outbreak. The All In Challenge requires celebrities to offer out of the box incentives in exchange for donations in an auction format and a random bidder is selected for the unique winning experience. In Hugh and Ryan's case, they will run a lemonade stand for the kid of the selected bidder for a day and hence the truce.

Funds raised by Hugh Jackman and Ryan Reynolds will go to relief organisations like Feeding America, Meals On Wheels, World Central Kitchen and No Kid Hungry. Well, now that we have established that Wolverine and Deadpool can put aside their differences for a good cause, let's take a look at how cordial (read rude) they were in the announcement video.

Titled the "All In Challenge," the video began with ROFL disclaimers such as "Jackmans and Reynolds have been mortal enemies for as long as there have been Jackmans and Reynolds" and "For generations it's been a family honor to oppose each other." The disclaimers also dragged in Hugh and Ryan's respective wives into the video: "Tolerated by Deb Jackman and Blake Lively." Ryan and Hugh also make fun of each other's businesses, saying "gin is for the weak" and "coffee is for sleepy people." Ryan owns a gin brand while Hugh is a coffee person.

I've agreed to trust that Ryan can hold his tongue for one day. A (very) temporary cease-fire for the @allinchallenge. I nominate @drewbrees and @therealmariskahargitay & @therealpeterhermann. And, to be assured we're even, I also nominate @vancityreynolds. @nokidhungry @wckitchen @feedingamerica @mealsonwheelsamerica

Meanwhile, as part of the All In Challenge, Leonardo DiCaprio and Robert De Niro have jointly offered a walk-in role in their next Marti Scrosese film Killers Of The Flower Moon while Gwyneth Paltrow is auctioning her her Oscars 2000 outfit - a hand-beaded Calvin Klein dress. Madonna has offered a jacket she wore on her Madame X Tour as part of the challenge.