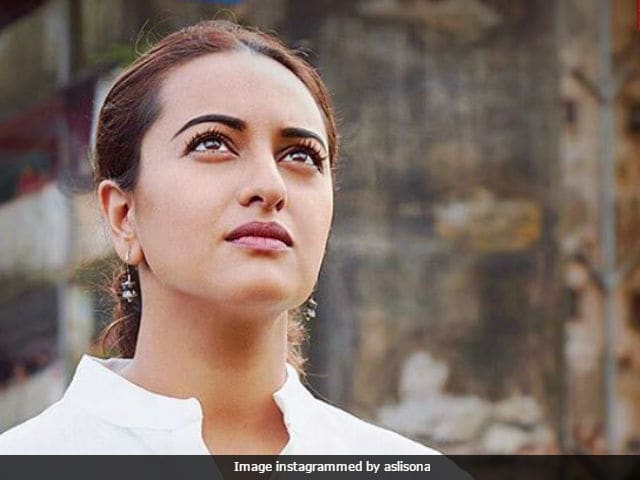 New Delhi: Actress Sonakshi Sinha shared a new poster of her upcoming film Noor on social media. In her post, the 29-year-old actress announced that a new song, titled Jise Kehte Pyaar Hai will be released on Thursday. "Love doesn't make the world go round. Love is what makes the ride worthwhile. #JiseKehtePyaarHai from @NoorTheFilm #OutTomorrow @tseries.official @abundantiaent @sunhilsippy @amaal_mallik @sukritikakarofficial(sic)," wrote Sonakshi Sinha. Jise Kehte Pyaar Hai will be the fourth song to be released from the film. Noor, directed by Sunhil Sippy, will see Sonakshi portray the role of a journalist who juggles between her professional and personal life. The film is scheduled to release on April 21.

See the poster shared by Sonakshi Sinha below:

On March 7, Sonakshi Sinha shared the trailer of Noor on social media. Watch the trailer here:


Noor is based on Pakistani author Saba Imtiaz's novel Karachi, You're Killing Me!. Kanan Gill will be making his Bollywood debut with this movie.

In a recent interview to news agency IANS, filmmaker Sunhil Sippy said: "Noor is a women centric film and it is really about 'Noor' and her coming of age but every character in the film is three dimensional. So the behaviour of every opposing character will be revealing things about main lead. Noor is in constant conflict and other characters are balancing, so she is not overshadowing anybody in the film. Noor is defined by the world she exists in. She is defined by interaction with others, so all the characters had to be equally rich as her."

Noor also features Shibani Dandekar and Purab Kohli in key roles. Sunny Leone will be making a cameo appearance in the film.

Promoted
Listen to the latest songs, only on JioSaavn.com
Sonakshi Sinha was last seen in 2016 movie Force 2, co-starring John Abraham. The film, directed by Abhinay Deo, is a sequel to 2011 movie Force. After Noor, the Akira actress will feature in Ittefaq, directed by Abhay Chopra. The film, which is a remake of 1969 film of the same name, also features Sidharth Malhotra, Akshaye Khanna and Rajkummar Rao.