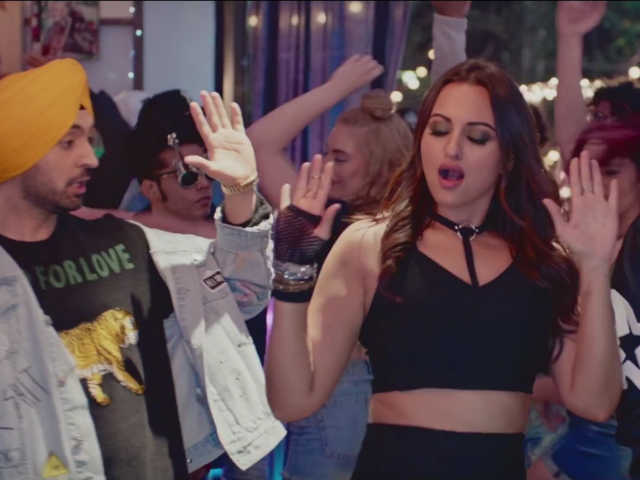 Noor: A still from the song Move Your Lakk

New Delhi: Actress Sonakshi Sinha released the second song from her upcoming film Noor on Wednesday. The song, titled Move Your Lakk, will make you want to put on your dancing shoes. The song has been sung by singer turned actor Diljit Dosanjh, rapper Badshah and Sonakshi Sinha. In the song, the Lootera actress can be seen transforming from drab to fab and grooving to the music beats at a club along with Diljit and Badshah. The lyrics of the song, which is almost four minutes long, have been written by Badshah. Sonakshi Sinha will be seen portraying the role of a journalist in Noor.

Check out the latest track from Noor here:

Noor is based on Pakistani author Saba Imtiaz's novel Karachi, You're Killing Me! and follows a Pakistani journalist-writer Noor's misadventures and love life as she navigates her way through Mumbai.

In a recent interview to news agency IANS, filmmaker Sunhil Sippy said Sonaskhi Sinha was the first choice for the film and that she has a 'tremendous range'. "I like the fact that Sonakshi Sinha has tremendous range. She is funny, quirky, and silly but she is also very intense and serious. In Noor, I got the opportunity to explore every part of her as an actor," Mr Sippy told IANS.

Promoted
Listen to the latest songs, only on JioSaavn.com
Kannan Gill will be making his debut with this film and will portray the role of Sonakshi Sinha's best friend.

Noor is scheduled for a worldwide release on April 21.