"No Work" Day For Sara Ali Khan Looked Like This 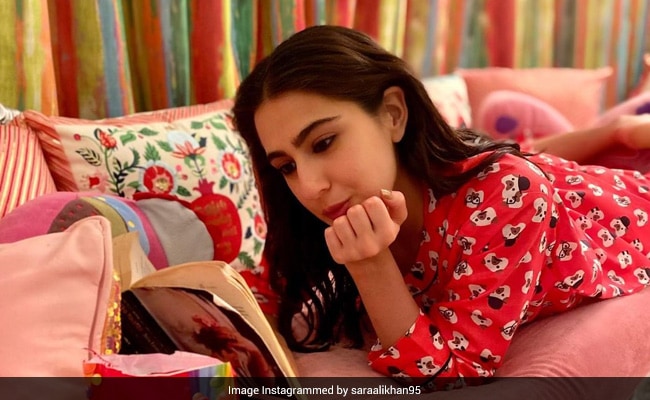 It was a "no work" day for Sara Ali Khan on Friday. So, how did she spend the day? Sara opted to utilise the time by reading a book. The actress shared a glimpse of her reading time on Instagram and it is giving us major weekend vibes. In the picture, the Kedarnath actress can be seen resting on a pink couch as she reads the book which appears to be a novel. Sara looks super cute in her red printed night suit. The actress also kept flavoured candies by her side.

Sara recently shared a few pictures from her beach vacation on Instagram. She didn't disclose the name of the location to her Instafam. The 25-year-old actress wrote, " Hakuna Matata- it means no worries."

Sara was also in the headlines when she attended a get-together organised by Karan Johar on March 23. Pictures of their meeting were trending on social media. In the photos, Sara was seen posing with Vijay Deverakonda, Karan Johar and Manish Malhotra.

Sara Ali Khan made her debut with Kedarnath in 2018. Sara was paired opposite Sushant Singh Rajput in the 2018 film. The actress was last seen in David Dhawan's Coolie No 1 in 2020. She will next feature in Atrangi Re opposite Akshay Kumar and Dhanush.The upcoming film is directed by Aanand L Rai.