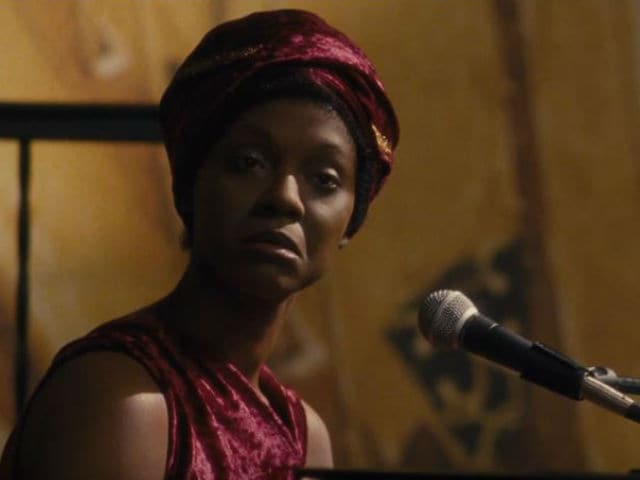 zoe Saldana in a still from the film Nina.

Washington: After years of production troubles and repeated delays, a controversial biopic about legendary jazz singer and Civil Rights icon Nina Simone is finally due to hit theaters next month - and a lot of people have made it clear that they won't be seeing it.

The backlash against director Cynthia Mort's Nina has been particularly sharp since it was announced in 2012 that the light-skinned Zoe Saldana, who is Dominican and Puerto Rican, would play Ms Simone. The choice sparked an onslaught of infuriated blog posts, calls for a boycott and even a petition for a casting change.

That outrage was renewed this week after Entertainment Weekly released an official movie poster and trailer for the film, which showed Saldana in skin-darkening makeup and a prosthetic nose.

Despite significant controversy, #Nina, a years-in-the-making biopic of the so-called "High Priestess of Soul," will debut in theaters this April.

A photo posted by Entertainment Weekly (@entertainmentweekly) on Mar 1, 2016 at 5:13pm PST

This did not go over well in the Twitterverse:

Zoe Saldana should not be playing Nina Simone, no, no, no, pic.twitter.com/cSLtRVepUr

I did theater. I love theater. I'm still not giving a pass on Blackface so that we can pretend Zoe was better qualified than anyone else.

Ms Simone's daughter, actress and singer Lisa Simone Kelly, has vocally disavowed the film for years. In 2012, Simone Kelly told the New York Times that she respected Ms Saldana but was disappointed by the choice to cast her in the role.

"My mother was raised at a time when she was told her nose was too wide, her skin was too dark," Simone Kelly told the Times. "Appearance-wise this is not the best choice."

She has also voiced anger that her family was excluded from the biopic's production process.

"How does someone just decide to do a story about someone and completely bypass family?" she said in a 2012 interview with Ebony Magazine.

Simone Kelly instead threw her support behind the critically acclaimed, Oscar-nominated documentary What Happened, Miss Simone? which she said captures the full, tragic scope of her mother's life and the way her career was shaped by racism.

Humor writer and blogger Luvvie Ajayi was among those who said she would skip the film in solidarity with Simone Kelly.

"Maybe I'm just being a hater but this is a terrible choice, in my opinion. I won't be supporting this movie. Not just because Zoe's clearly a bad casting decision, but because Nina Simone's own daughter is sternly against it for many reasons (and they're justifiable)," Luvvie wrote. "They can keep this one."

The movie is set to debut in theaters April 22. On Nina Simone's official Facebook page, Simone Kelly encouraged her mother's fans to make other plans instead: "We can use this date as an other opportunity to celebrate Nina's life and music," she wrote, urging fans to host listening parties or screen What Happened, Miss Simone?."

"Nothing can diminish Nina or her legacy," she said in the post. "No one can rob Nina of her gift - or rob us of the gift she shared with us."

In light of today's announcement, I encourage fans and eligible venues to host their own NINA SIMONE listening/viewing...