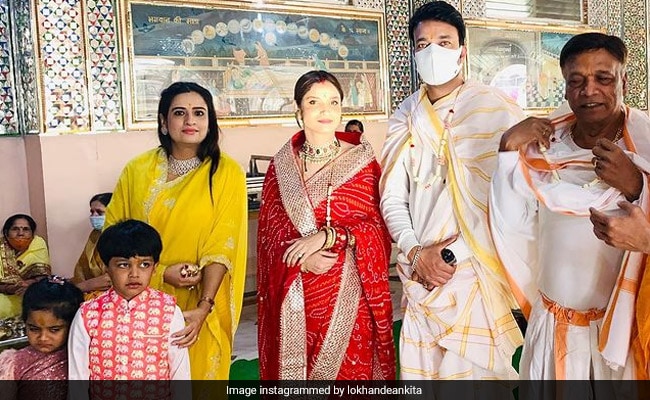 It has just been close to two months since actress Ankita Lokhande got married to Vicky Jain. The actress has been sharing regular snippets from her married life over the past few weeks. From wedding photos to behind-the-scenes moments before the big day, she has us hooked to her social media timeline. Now, in her latest Instagram post, she has given her fans a new update. In the photos shared by Ankita Lokhande, the newlyweds, along with some family members, are seen visiting a temple. Ankita chose to wear a bright red saree and traditional jewellery that added to her new bride charm. Vicky Jain picked a white and gold kurta and dhoti.

Ankita Lokhande's post took us through some of the rituals being performed by the family at the temple. In a photo, the couple is sitting around a sacred fire or havan. In one image, the actress is with the other women of the house, offering prayers.

In the caption, Ankita Lokhande wrote, "New bonds and new learnings" and added a red heart icon. Actress Shubhaavi Choksey commented with red heart emoji and an emoticon to ward off bad omens.

Ankita Lokhande has been keeping her Instafam informed about all her post-wedding rituals. The newlyweds performed a Griha Pravesh ritual right after their wedding ceremony and the actress also shared a video of the event.

However, recently, Ankita Lokhande got trolled online for sharing a slew of wedding photos on Instagram. Ankita replied to such trolls in a statement saying, "Meri shaadi hai, main nahi dalungi toh kaun daalega ([t was my wedding. If I don't post, who will]?"

Ankita Lokhande had also posted a video of the dance practice and fun sessions in the run-up to the grand sangeet ceremony.