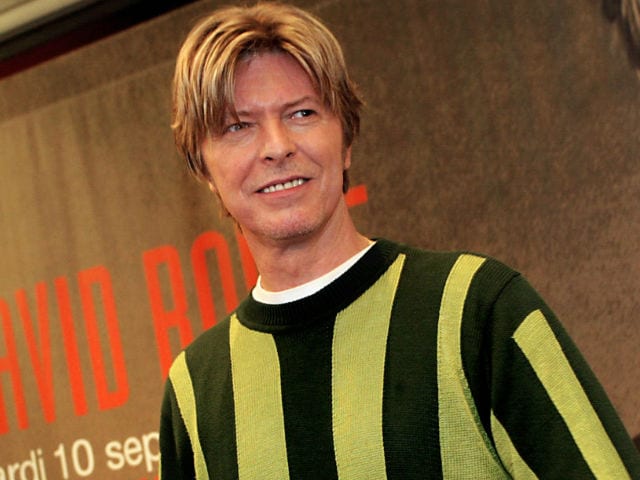 A file photo of David Bowie in Paris in 2002. (Image courtesy: AFP)

New York: New York declared Wednesday "David Bowie Day" to honor the late music legend and longtime resident, as one of his final works - a science-fiction play - closed its run.

Mayor Bill de Blasio issued a proclamation making January 20, 2016 "David Bowie Day" that will be read at the final curtain call of Lazarus.

The symbolic proclamation pays tribute to the British artist as "a global icon who made New York his home."

"Among the most influential and talented artists of our time, Mr Bowie's music, his art, his unique creative vision have left a mark on the lives of generations of fans," said Luis Castro, acting commissioner in the mayor's office of media and entertainment.

David Bowie died on January 10 after an 18-month battle with cancer that he did not disclose to the public.

Mr Bowie, who considered African-American soul and funk his first love and idolized pop artist Andy Warhol, spent much of his life in New York, settling in the city permanently after his 1992 marriage to Somali-born supermodel Iman.

His death came two days after he released his last album, Blackstar, which in retrospect was revealed to be an intricate final artistic statement. (Also Read: Death Brings a Breakthrough Moment in David Bowie's Brilliant Career)

Mr Bowie had also raced to complete the music for Lazarus, a play based on the novel The Man Who Fell to Earth about an alien in search of water for his parched planet who becomes enamored of Earth's delights.

Mr Bowie, who was an actor, painter and fashion icon in addition to a musician, had played in a 1976 film version of The Man Who Fell to Earth but did not write the music due to a contractual dispute.

The play's director, Ivo van Hove, said that Bowie told him in confidence of his illness and that he was eager to complete the work before his death.

Mr Bowie made his last public appearance at the December 7 premiere of Lazarus<.i>, which is playing at the New York Theatre Workshop, a small off-Broadway venue known for experimental works.

Amid the outpouring of grief for Mr Bowie's death, Blackstar topped the US album chart - a first for Mr Bowie, who enjoyed more mainstream success in Britain and several other European countries.

Blackstar went to number one in most major music markets including Australia, Britain, France, Germany and Japan.