New Bride Divyanka Tripathi Says 'Nothing Scares Me About Marriage' 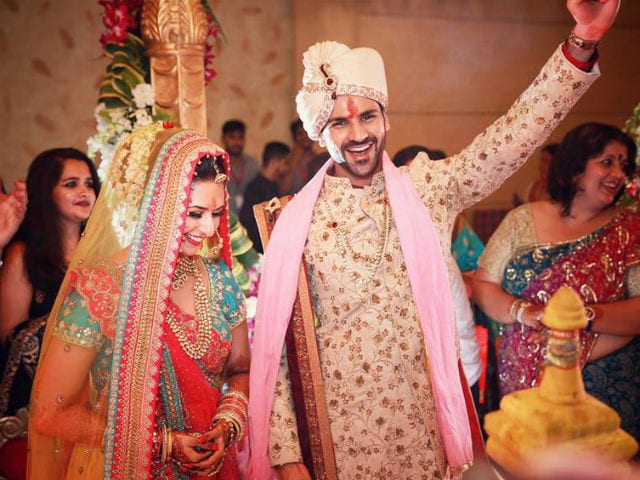 New Delhi: Television actress Divyanka Tripathi married her Yeh Hai Mohabbatein co-star Vivek Dahiya in Bhopal on July 8. Newly-married Divyanka, who is on a 10-day break from work for the wedding, confessed that she was nervous about her wedding but later was at peace once reaching her hometown Bhopal. Divyanka and Vivek will continue the celebrations with a reception in Chandigarh, Vivek's hometown.

Divyanka also Instagrammed a selfie on Sunday introducing herself as the new bride and her husband Vivek:

In an interview with The Times of India, Divyanka said she experienced "wedding jitters" and that the wedding was not without glitches - her wedding dress was not delivered on time to be coordinated with Vivek's attire.

"I had wedding jitters when I was in Mumbai, but I was at ease once I reached Bhopal. I enjoyed all the rituals and danced the most. I am the happiest bride on earth," she said.

"My wedding dress wasn't delivered to me on time, so I couldn't coordinate it with Vivek's," Divyanka added.

Nevermind, for the duo looked nothing short of stunning at their wedding, pictures of which were shared on social media.
Divyanka, who was a traditional Indian bride in red lehenga-choli, revealed details about her fashion pick for the reception to The Times of India. (Hint: It appears, red is her favourite colour.) "My outfit for the reception will be red because I want to be a typical Indian bride. And what better than red for that? Besides, the colour also suits me," said Divyanka.

When asked about her decision to marry her co-star, Divyanka said that marrying someone from the same professional industry ensures a stable relationship. She also opened up about the kind of equation she intends to have with her partner and said she will never leave an argument unaddressed. Divyanka told The Times of India: "Earlier, I thought it would be better for an actress to marry a businessman or a person from other profession as it offers more stability. But then I realised that if I marry someone who doesn't belong to the same industry, he wouldn't understand my erratic schedules and also the norms of the glamour industry. You tend to relate to the other person better if you understand their professional needs."

"I won't sleep until I have resolved an issue with my husband. I can never lie to my partner. Even if the truth is harsh, I'll break it to my partner, but won't lie," she added.

Before signing off, Divyanka told The Times of India that she is not the least afraid about her marriage and that she feels lucky to have found Vivek as her life partner. Here's what she said: "Nothing scares me about marriage. It is beautiful to see two people in a lasting relationship. Every match is made in heaven and I feel lucky to find my life partner in a person with whom I'd love to spend my entire life. A person has to be truly blessed for such a union. Fortunately, I have seen only successful and motivating relationships around me that inspired me to get married. I am now looking forward to a happy married life with Vivek."

Divyanka's wedding was preceded by a sangeet on July 7, and a haldi and a mehendi on July 6. Divyanka looked beautiful in blue at her sangeet and was pretty in pink for her mehendi. She was gorgeous in a yellow lehenga-choli at her haldi ceremony.

Game Of Thrones Season 7: Ed Sheeran To Guest Star On The Show