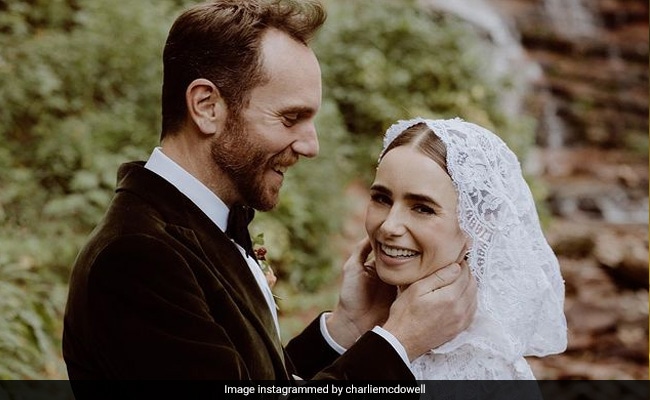 Lily Collins surprised fans across the globe when she shared pictures of her wedding to Charlie McDowell on social media on Tuesday. The Emily In Paris star married her director fiancé in an intimate ceremony held over the Labour Day weekend. The couple got married in a ceremony held on September 4, in Dunton, Colorado. The 32-year-old actress shared images on Instagram and it looks straight out of a fairytale. Along with the photos, Lily Collins also penned sweet notes, giving fans and followers a peek into their journey as a couple and now, their wedding.

In the images, Lily Collins is seen in a traditional bridal white dress and Charlie McDowell looks dapper in a tuxedo. Sharing the first photo in which the couple is kissing, the actress wrote, “I have never wanted to be someone's someone more than I do yours, and now I get to be your wife. On September 4, 2021, we officially became each other's forever. I love you beyond, Charlie McDowell,” tagging her husband.

Lily Collins shared a second image as well. This time, Charlie McDowell is seen gazing at Lily lovingly as she smiles for the camera. The picture seemed to perfectly encapsulate what Lily Collins wrote in the caption. She said, “Never been happier.”

Charlie McDowell shared the same photo on Instagram. The 38-year-old wrote, “I married the most generous, thoughtful, and beautiful person I have ever known. I love you, Lily Collins.”

Replying to it, Lily said, “I'm so excited to be your wifey."

The third picture has our heart. Here, the happy couple is seen sharing a tender moment beside a waterfall located in the woods. Along with the image that had the Internet collectively go “aww”, Lily Collins wrote, “What started as a fairytale, is now my forever reality. I will never be able to properly describe how otherworldly this past weekend was, but magical is a pretty good place to start.”

Actress and producer Resse Witherspoon spoke for all fans and followers when she said, “I'm so happy for you two. Many happy wishes for a wonderful marriage.”

Resharing the photo, Charlie McDowell said, “This moment will forever play inside my head.” And, in all ours too.

Lily Collins and Charlie McDowell announced their relationship in August 2019 and got engaged a year later in September.