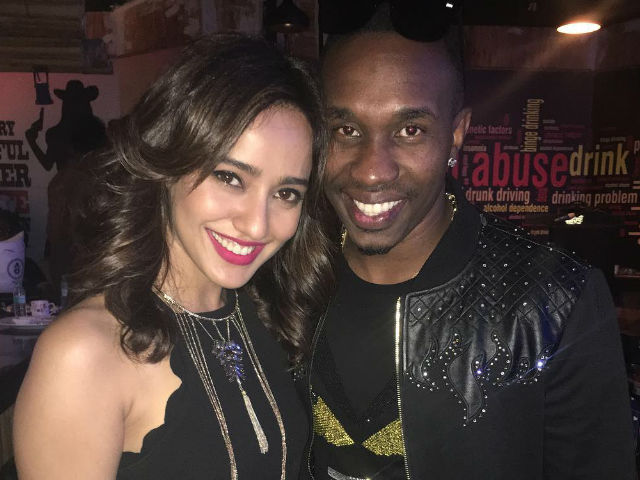 This image was posted on Instagram by Dwayne Bravo

Mumbai: He is known for his performance on the cricket field, but it turns out West Indies all-rounder Dwayne Bravo is also an impressive dancer, according to actress Neha Sharma, who shot with him for a music video in Tum Bin 2.

Dwyane recorded a song titled J ger Bomb for the upcoming romantic-drama. The cricketer also shot for a music video along with the film's cast, including Neha, Aashim Gulati and Aditya Seal.v The Crook actress says Dwayne is easy going and they all came together to shoot for the song without any preparation.

"He (Dwayne Bravo) is so chilled out, easy going and so much fun. He came in with his game on. I don't think any of us had any kind of rehearsal or preparation for it. Everything that you see is impromptu," Neha told PTI.

The actress reveals the video was shot within a day and the intention of the cast was just to have fun.

"We did it in a day. Everybody came in together, we were like 'this is what we are going to do, let's have fun. It is a party song, so it is all about having fun. Of course I am dancing with him. It's a party number so everybody is dancing and having a good time," she said.

The 28-year-old actress is happy that the audience has appreciated the music of Tum Bin 2 so far and hopes the song with Bravo is also lapped up.

"I don't know when it (the song) is releasing. We have started releasing the songs so one after the other it'll be coming out. Everything which has come out, people have loved it. I am hoping they will love this one too," she said.

When asked if Bravo should do a Hindi film, Neha quipped, "I will definitely tell him to do a Hindi film as you said. I will convey your message to him."

Promoted
Listen to the latest songs, only on JioSaavn.com
Tum Bin 2 is scheduled to release on November 18.