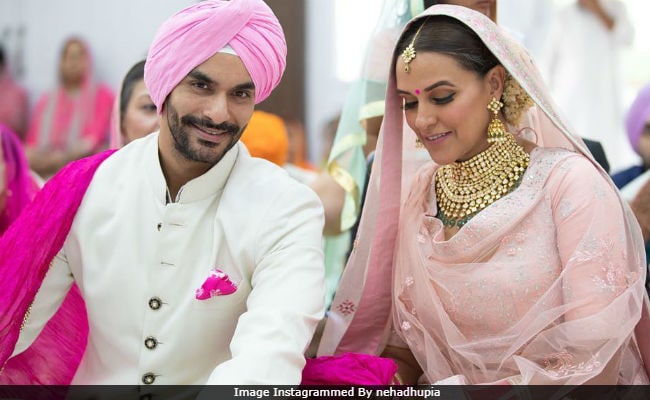 New Delhi: Will the trolls ever relax? Seems the answer in NO. Trolling actress Neha Dhupia for marrying Angad Bedi, who is some years younger to her, is everything that's wrong with the Internet. Earlier this week, Neha shared an introductory video from Soorma, Angad's forthcoming film and captioned it as, "A person with a heart of gold - meet Bikramjeet Singh aka Bikram in Soorma." When most of the people congratulated Angad for his new film, a troll found something else to comment on the post. "2 saal chota hai tumse Angad Bedi. Husband nahi bhai hai tumhara. Rakhi pehnao," read the comment. (Like, seriously?).

However, Neha Dhupia hit back at the troll like a boss and replied, "Thanks for the advice buddy! Now do me a favour, go get a life!" (Whoa. You go, girl!).

Here's what Neha had shared.

It's not for the first time an actress is trolled for a particular reason, the list is long. Stars like Deepika Padukone, Priyanka Chopra, Esha Gupta, Ameesha Patel and many others have been shamed online for their choice of clothes and for various other reasons.

Meanwhile, Neha Dhupia, 37, and Angad Bedi, 35, got married on May 10 in an extremely private ceremony at a gurudwara in New Delhi. The couple shared their wedding news on social media with photos from the ceremony.

Promoted
Listen to the latest songs, only on JioSaavn.com
Soon after the wedding, the couple travelled to the US to attend a fund raising event for kids. They returned to India on Wednesday.

With the mrs at the #pratham #gala in Houston #usa wearing @raghavendra.rathore #charity

Neha Dhupia will be next seen in Netflix's Lust Stories and also has Eela in the line-up. Angad Bedi was last seen in Tiger Zinda Hai and Soorma, with Taapsee Pannu and Diljit Dosanjh, is his next film.