Did you know, Karan Johar played an important role in their love story? 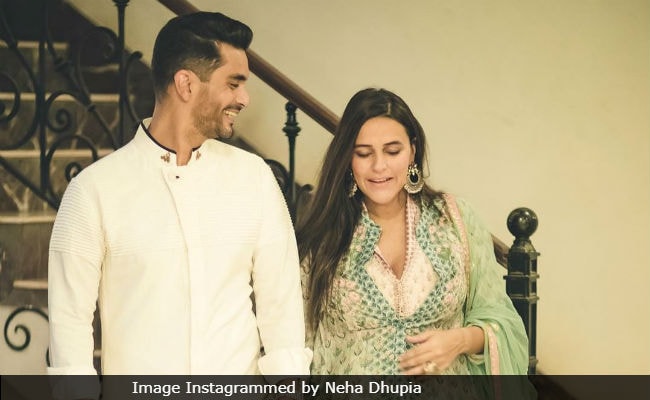 Some love stories are just meant to be and Neha Dhupia and Angad Bedi's story reminds us of just that. In her piece for Humans Of Bombay, the 38-year-old actress made an interesting revelation about her and Angad Bedi's love story. Did you know that they first met in a gym when Neha was 20 years old? Yes. In her post, Neha revealed how Angad saw her in a gym for the first time and told his friend, "I'm going to get to know her one day.'" Neha, who is expecting her first child with Angad, documented all the facets of their relationship, right form the time when they used to be close friends, to getting married. In her post, Neha described how Angad stood by her through thick and thin. She wrote: "I always fell back on him for support. He lived a bachelor life and he knew the one place he could always stop for unreasonable demands of home food day or night was my place. We became close friends-there was no facade, no judgements and no attempts to impress one another. Well, no attempts to impress on my part! In fact, he was the first call I made after a major heartbreak and he talked me through it. Of course, I'm sure there was a hidden motive!"

Neha also opened up about how Angad "wasn't subtle" about his love for her and revealed that it was her filmmaker friend Karan Johar, who helped her realise that her now husband, Angad Bedi was madly in love with her. "Finally, at a party, Karan Johar took us aside and screamed at us- 'Can you not see this?! Are you blind?' You should have seen the look on Angad's face. It was like he had 'I told you so!' tattooed on his forehead," read an excerpt from Neha Dhupia's post.

Read more about Neha Dhupia and Angad Bedi's journey from best friends to life partners in her Humans Of Bombay post here:

"He tells me that he 1st saw me at the gym when I was 20 & told his friends, 'I'm going to get to know her 1 day.' When we moved to Bombay, we met at a mutual friend's party-it was just us standing in the balcony. I saw a different side of him-beyond the jokes & wit, there was a sensitive man. We were both away from home in Mumbai, so I always relied on him for support. He lived a bachelor life & the 1 place he could always get home food was mine. We became close friends-there was no facade & no attempt to impress one another. Well, no attempts on my part! In fact, he was the 1st call after a major heartbreak & he talked me through it-I'm sure there was a hidden motive! He wasn't low key about his feelings for me. I was shooting in Punjab & told him about a role for him. He didn't ask for any details. He only cared about spending time with me & flew down immediately. After that shoot, he showed up at my parents' doorstep & asked for my hand in marriage....I had no idea about it! This was when I was dating someone else! When Angad met my boyfriend, he was nice to him, but wasn't subtle about his love for me! Finally, at a party, Karan Johar took us aside & screamed, 'Can you not see this?! Are you blind?' You should've seen the look on Angad's face. He had 'I told you so!' tattooed on his forehead. When we finally decided to get married, he didn't go down on one knee & propose. He told me I'd already wasted 4 years & declared 'Chalo Dilli!' to meet his parents. Then he said, 'Before you change your mind, pick an outfit because we're getting married in 2 days!' Earlier, I loved the set life. I wouldn't give it up for anything. But now I look forward to coming home to him. I couldn't imagine myself as someone who runs to the door, but when it's time for him to come home, guess what I do? He's currently shooting both day & night. When he comes back at 7 am, he makes me breakfast & then goes to sleep. We're still figuring it all out & don't expect to have it all together. Everytime we've planned our lives, they've fallen apart-so we're sticking to the unplanned! The wedding, the baby, the parenting..we're winging it all!"

In her post, Neha also shared how Angad didn't propose to her in a convention way. "When we finally decided to get married, he didn't go down on one knee and propose. He told me I'd already wasted 4 years and declared Chalo Dilli! to meet his parents. Then he said, 'Before you change your mind, pick out an outfit because we're getting married in two days," said Neha Dhupia.

Neha, who got married to Angad in May this year, added, "Every time Angad and I have planned something for our lives, our plans have fallen apart- so we're sticking to the unplanned! The wedding, the baby, the parenting...We're winging it all."

Neha Dhupia and Angad Bedi got married in May this year and three months after their hush hush wedding, the couple announced their pregnancy on social media.