"It's her choice. Maybe the problem lies with you," Neha Dhupia told the contestant who claimed his girlfriend was cheating on him 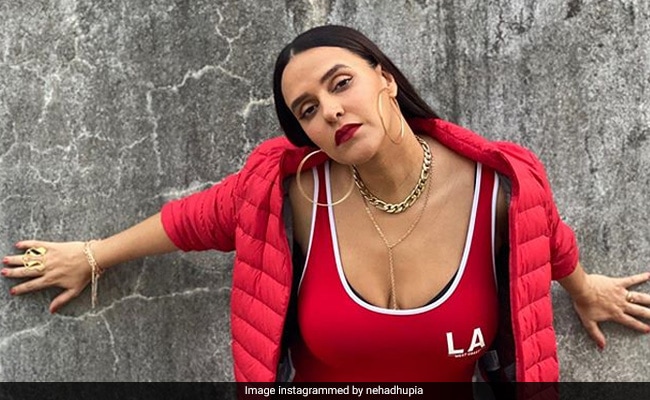 Neha Dhupia from the sets of Roadies (courtesy nehadhupia)

Actress Neha Dhupia, who is a leader on Roadies Revolution, has been trending for over a day after telling off a male Roadies contestant who admitted to slapping his allegedly errant girlfriend. A video clip of Neha rebuking the contestant for hitting his girlfriend has gone crazy viral - and not because the Internet is applauding Neha for speaking up against violence. She has, instead, been accused of being hypocritical. In the viral clip, Neha reprimands the Roadies contestant who claimed he slapped his girlfriend for allegedly cheating on him with five other men. Neha's response: "Yeh jo tu bol raha hai na ki ek nahi paanch ladko ke saath gayi thi... sun meri baat - it's her choice (You're saying she was with five men... listen to me... it's her choice). Maybe the problem lies with you. Nobody gives you the f***ing right to slap."

Twitter was incensed rather than impressed by Neha Dhupia's response, invoking a past Roadies incident in which a female contestant said she had slapped four men. Neha's casual reaction at the time is being contrasted with her angry outburst now. "Such double faces on equality," Neha has been told on Twitter. "Be a feminist, not a fake feminist," read another tweet. Another angry netizen wrote: "These are signals of fake feminists." Some on the Internet also were also outraged by what they perceive as Neha excusing infidelity.

Neha Dhupia was the top trend on Twitter on Friday morning.

Shame on people like @NehaDhupia, who show such double faces on equality !! https://t.co/z6XWMOFHIj

So if a girl slap a guy when he cheats on her it's ok? But if a guy does the same it's treated like that? Hypocrites..

See the language she uses and so much arrogance. These are signals of fake feminists and liberals #NehaDhupia#fakefeminismhttps://t.co/D3LxKs0Ezy

If a person is dating someone and he/she dates other people at same time thn he/she is 100% characterless .Here I said it. #NehaDhupia

Meanwhile, the 39-year-old actress also featured in several memes for her comments on Roadies:

#nikhilchinappa#nehadupia - girl can have 5 bf it's her choice

#NehaDhupia
*Neha Dhupia saying having 5 boyfriends is a personal choice*

The slap that the maleRoadies contestant says he administered to his girlfriend appears to have raised fewer hackles than Neha Dhupia's reaction - a timely reminder of why more films like Taapsee Pannu's Thappad, which deals with domestic violence, need to be made.

Neha Dhupia is part of Roadies Revolution along with Raftaar, Rannvijay Singha, Prince Narula and Nikhil Chinappa, who hosts the show.