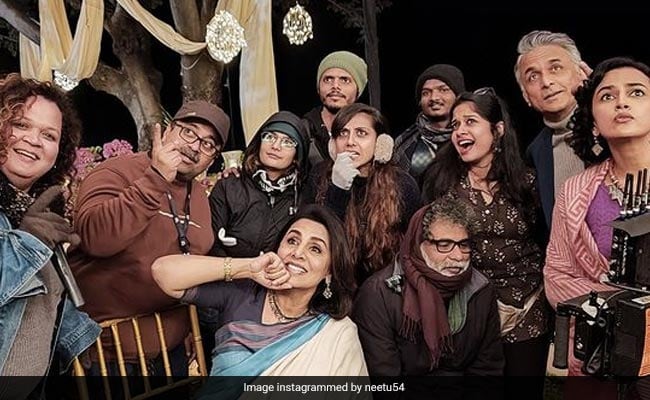 Neetu Kapoor is having a great year. From making a comeback to the movies with Jug Jugg Jeeyo to turning a grandmother with son Ranbir Kapoor and Alia Bhatt's daughter, Neetu Kapoor has been sharing all her happy moments with fans. Now, the veteran actress has dropped a photo from the sets of her new project Letters To Mr Khanna. Neetu Kapoor provided context to the photo by explaining in the caption that it involved dancing at 4 am. She wrote, “Faking happy faces. In reality, it's 4 a.m dancing in freezing weather since two nights.” Also seen in the photo is actress Shraddha Srinath. Replying to the post, director Karishma Chavan – who is also in the image – said: "It's an honour to have you bringing our creation alive."

Neetu Kapoor will share screen space with Sunny Kaushal and Asrani in Letters To Mr Khanna. She will be working with Asrani after 47 years.

Over the weekend, Neetu Kapoor also treated us to a throwback image of her late husband Rishi Kapoor with their son Ranbir Kapoor. Also in the frame is film analyst Raj Bansal. The picture was clicked at Padampura Jain Temple, Neetu Kapoor said, adding that she paid a visit to the same temple recently with Raj Bansal and his son after 30 years. Sharing the pictures, the veteran actress wrote, “After 30 years visited the same temple with Raj Bansal this time with his son.”

As a new grandmother, Neetu Kapoor also picked the name of her granddaughter, a post by new-mom Alia Bhatt revealed.  Alia, announcing the name of their little bundle of joy, said the name was chosen by  “her wise and wonderful Dadi”. The baby has been named Raha. Sharing the news, Alia said, “The name Raha (chosen by her wise and wonderful Dadi) has so many beautiful meanings… Raha, in its purest form, means divine path. In Swahili, she is a joy. In Sanskrit, Raha is a clan. In Bangla - rest, comfort, and relief. In Arabic peace. It also means happiness, freedom and bliss. And true to her name, from the first moment we held her - we felt it all. Thank you Raha, for bringing our family to life, it feels as though our lives have only just begun.”

Meanwhile, Letters To Mr Khanna is being directed by Milind Dhaimade. It is Lionsgate India Studios' first feature film.