Note that in your TIL diary already 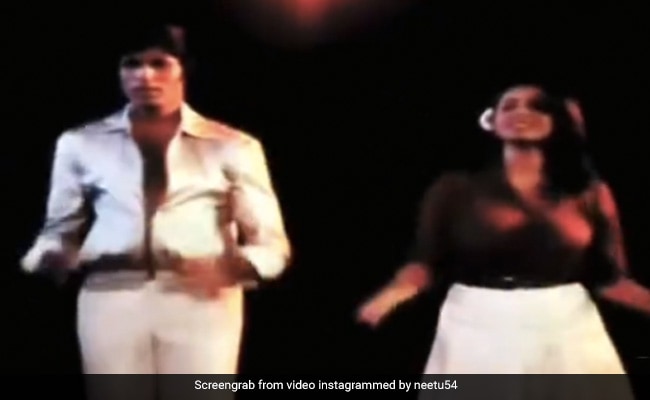 Big B and Neetu Kapoor in a still from the video. (courtesy neetu54)

There's nothing like a trip down Bollywood's memory lane to jazz up a boring Thursday morning, right? Thanks to veteran actress Neetu Kapoor's latest post on Instagram, we are now left wistfully recalling our favourite moments from the timeless classic, Yaarana. The movie starred Neetu Kapoor alongside actors Amitabh Bachchan and Amjad Khan. The video, showing a clip from the 1981 blockbuster, has left us all feeling nostalgic. Neetu Kapoor's reason to post it is no less sentimental. In the caption, she wrote, “This montage from Yaarana is very special as I choreographed it”.

The video is essentially the montage from the movie where Neetu Kapoor's character, Komal, teaches dance to Amitabh Bachchan's character, Kishan Kumar. It shows the duo swaying gracefully, smiling and basking in the glow of the spotlights.

Neetu Kapoor looks as gorgeous as ever, and Amitabh Bachchan is seen in a white suit. Needless to say, seeing them in this unforgettable retro setting has made us feel nostalgic for all the right reasons. Neetu Kapoor's daughter, Riddhima, showed her love in the comments section, while fans chimed in with their everlasting affection for the stars.

This is not the first time Neetu Kapoor has taken us with her on a nostalgia trip. Who can forget her post on Instagram on the occasion of Eid? The collage of her and late actor Rishi Kapoor from the iconic song Parda Hai Parda of the 1977 Bollywood hit Amar Akbar Anthony made us smile at the couple's on-screen chemistry. It also made us miss Rishi Kapoor sorely.

We also can't help but fawn over how adorable and equally gorgeous Neetu Kapoor looked in her throwback to the 1968 Bollywood film Do Kaliyan.

Which is your favourite Neetu Kapoor movie? Let us know in the comments.

From Renuka Shahane, Some 90s Nostalgia With Co-Star Kunal Kemmu