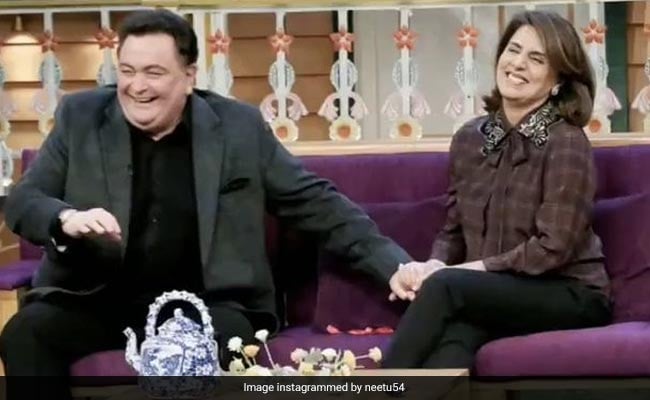 Neetu Kapoor and late actor Rishi Kapoor had been a Bollywood power couple for decades until the actor died of cancer in 2020. Today, they would have completed 42 years of marriage. Cherishing the memory of her late husband in her heart, Neetu Kapoor has shared their images on Instagram. The candid photos are from the sets of Kapil Sharma's show. In the photos, Neetu and Rishi Kapoor are seated on a sofa while beaming with happy vibes. In one photo, the two hold each other's hands. Next, we see Rishi Kapoor in the middle of a conversation while Neetu Kapoor cracks up laughing. She has captioned the photos, "In remembrance" and added a red heart icon.

Last year, comedian Kapil Sharma had shared a photo from the time when Neetu Kapoor and Rishi Kapoor had attended his talk show. The charm of the Bollywood couple grabbed our attention in no time.

Neetu Kapoor's Instagram page is sprinkled with gems from the past. And, most of them are her photos with Rishi Kapoor. Whenever she gets her hands on some pics of the two, the actress makes it a point to share the image with her Instafam. Once Neetu Kapoor shared a snapshot where she is sitting with Rishi Kapoor on a vintage model motorcycle. Both are in the heydays and are dressed in the peppy colours of bygone days. The actress posted the photo and wrote, "Justtttt" with heart emojis.

Last year, Neetu Kapoor celebrated Rishi Kapoor's birth anniversary with a heartwarming appreciation post. She wrote, "I learnt a lot from Rishi Ji during our last few traumatic years in NYC... How we celebrated when his blood counts were high, we dined, shopped and laughed. In his lows, we just stayed home, watched TV, ordered amazing food and still had some wonderful moments in hope that the next round of chemotherapy he would be better."

Neetu Kapoor will be next seen in the film Jug Jugg Jeeyo.