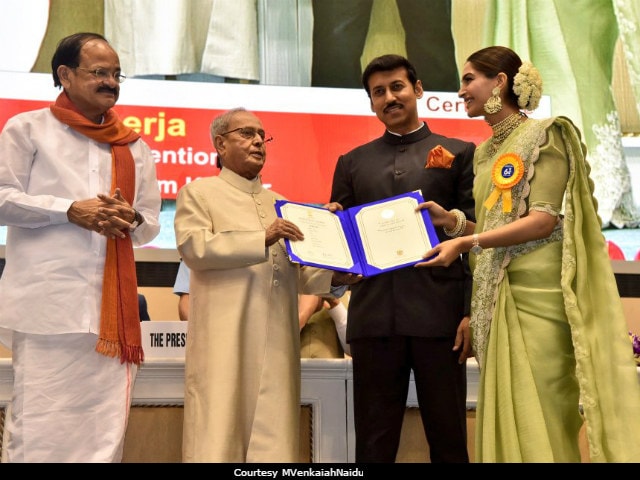 New Delhi: Sonam Kapoor received Special Mention at the 64th National Awards for her performance as the protagonist in the biopic on slain Pan Am stewardess Neerja Bhanot. Anil Kapoor, who accompanied Sonam to the ceremony, tweeted congratulating his daughter soon after. "Clearly cannot contain my excitement! Father turns photographer! Congratulations Sonam Kapoor! So proud," wrote Anil Kapoor on Twitter. Sonam also had the company of her mother Sunita at the ceremony in New Delhi. She received the award from President Pranab Mukherjee while Anil Kapoor was spotted cheering from the audience. Ram Madhvani-directed Neerja also received the National Award for Best Hindi Film.

Anil Kapoor is also keeping us updated with the celebrations:

Of playing Neerja Bhanot in the National Award-winning film, Sonam said, "I tried to do everything thinking what would a girl, who was all about humanity and mankind, do in a situation like that." The 31-year-old actress also added: "Neerja speaks about the triumph of the human spirit." Sonam Kapoor was speaking on the National Award red carpet.

In an interview with IANS earlier, Sonam said that the National Award has encouraged her to take up "content driven" projects. "I think I have been doing content-driven films for a couple of years right now, but obviously the National Award is an encouragement to doing more of them."

Promoted
Listen to the latest songs, only on JioSaavn.com
Anil Kapoor had earlier told IANS that he was eagerly looking forward to Sonam receiving the honour. "I am very happy, she is so fortunate. In such a short span of time, at such a young age, with such a less number of films, she has got this recognition from the highest award in our country. I am looking forward to the May 3 event when Sonam will be on dais receiving an award from the President of this country," Mr Kapoor had said.