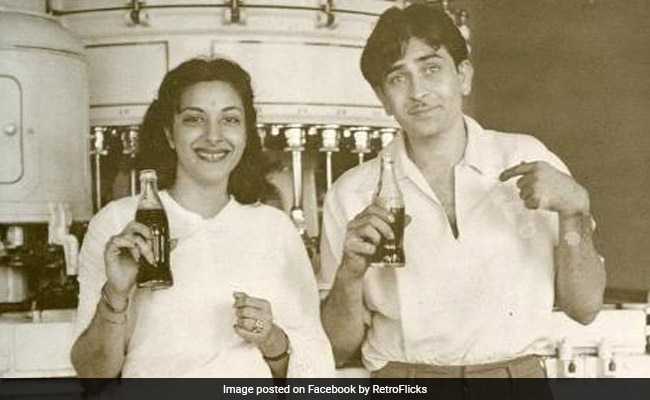 Looks like Rishi Kapoor is currently obsessing over throwback moments featuring the Kapoors and their love for Coca-Cola. And we are loving it! After sharing a blast from the past, featuring himself as a little kid, Rishi Kapoor tweeted a monochrome photo of his father Raj Kapoor and actress Nargis enjoying their Coca-Cola moment, which can only be classified as rare. The photo of Raj Kapoor and Nargis was originally shared by a fan-club named Retro Flicks on Facebook in 2012. Rishi Kapoor tweeted it on Thursday morning to say: "Another generation with Coca-Cola." Despite being a married man, Raj Kapoor had a long-standing affair with Nargis after he worked with Nargis in his directorial debut Aag for the first time. Raj Kapoor and Nargis had collaborated for 16 films in the 40s and 50s. Later, Nargis married Sunil Dutt after falling in love with him on the sets of 1957's Mother India.

Another generation with Coca Cola! pic.twitter.com/WOGPLgEfl7

Rishi Kapoor returned to India from New York in September this year after almost a year of cancer treatment in the Big Apple. His wife Neetu Kapoor was Rishi Kapoor's constant companion in New York. Rishi Kapoor was last seen in 2018 comedy Rajma Chawal.