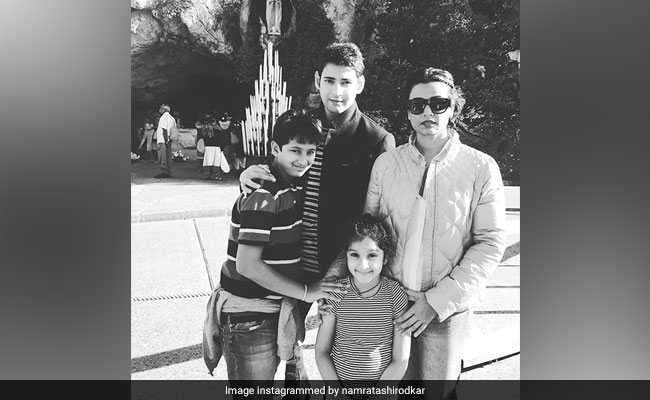 Mahesh Babu completed 39 years in Telugu Film Industry today and to celebrate this feat, his wife Namrata Shirodkar shared a throwback picture, a still from the actor's very old film. On Thursday, Namrata Shirodkar shared a still from his film in which he featured as a child artiste. In the picture, Mahesh Babu can be seen standing next to his co-actor and his real life father actor Krishna. Namrata did not mention the name of the film but captioned the photo as: "Throwback". Mahesh Babu made his Telugu film debut as a child artiste in Needa. His first appearance as a leading actor was in 1999 film Raja Kumarudu, which also featured Preity Zinta.

Take a look at the throwback photo shared by Namrata Shirodkar:

Namrata Shirodkar often delights fans with million dollar photos from her family vacations and get-togethers. Recently, Namrata accompanied Mahesh Babu to New York, where the actor was shooting for his upcoming film Maharishi. The couple's six-year-old daughter Sitara and 11-year-old son Gautham Ghattamaneni also accompanied them to the US where they had a gala time together. Namrata often updated fans with photos and videos from their New York vacation on Instagram.

Always fun to have the sun in fall #happytimestogether #hellonewyork

@urstrulymahesh After an amazing show of my all time favorite Broadway Classic, The Lion King... a perfect amalgamation of multilayered talent... a groupie with Rafiki was a must with the kids ... an evening well spent !!

Mahesh Babu and Namrata Shirodkar co-starred in 2000 film Vamsi and they fell in love while filming. Namrata married Mahesh Babu in 2005. Namrata, a former Miss India, quit films after getting married.