Namaste England Trailer: This Is How Far Arjun Kapoor Will Go For The Love Of Parineeti Chopra

Namaste England is the second installment of the Namaste London series 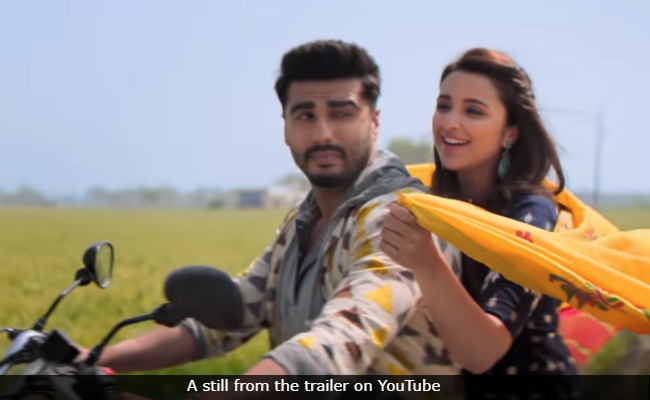 Arjun and Parineeti in a still from the trailer of Namaste England. (Image courtesy: YouTube)

The much-awaited trailer of Namaste England released on Thursday afternoon and it is already trending on Twitter. The film's cast is headlined by Arjun Kapoor and Parineeti Chopra and we must say, they look absolutely adorable together. The-three-minute video gives us an insight into the lead pair's fun-filled love story, though it will be difficult to say what we loved more about the trailer, Arjun's desi style or Parineeti's strong portrayal of an independent woman. The first half of the trailer perfectly encapsulates the essence of Punjab, while the latter section showcases the couple's life in London. Directed by Vipul Amrutlal Shah, Namaste England is slated to release on October 19.

Take a look at the trailer here:

Arjun Kapoor released the film's trailer on social media on Thursday afternoon and wrote: "How far can you go for love? Presenting the trailer of Namaste England."

How far can you go for love? Presenting the #NamasteEnglandTrailer. https://t.co/elWUbXNaJc@NamasteEngFilm@ParineetiChopra@RelianceEnt@PenMovies#VipulAmrutlalShah@jayantilalgada@sonymusicindia@erosnow#BlockbusterMovieEntertainers

On the eve of the trailer's release, film's leading lady Parineeti Chopra shared an emotional note on Instagram, in which she chronicled her journey of filmingNamaste England. She wrote: "As I stand at the eve of the trailer launch of arguably my biggest film, I can't help but feel a little emotional. This was a film I had dreamt of doing for a long time, and when I stood on the set in a traditional Indian outfit for the very first time, I felt like I was home."

As I stand at the eve of the trailer launch of arguably my biggest film, I cant help but feel a little emotional. This was a film I had dreamt of doing for a long time, and when I stood on the set in a traditional Indian outfit for the very first time, I felt like I was home. I dont think I would have wanted to share this journey with anybody else but Arjun. He is my most compatible co star, trustworthy mentor and honest friend. I can totally be myself and never have to apologise for it. Non judgemental and caring, Arjun has truly taught me how to handle this complex industry and business. He has the right to scream at me when I mess up, and vice versa. 3am friend? Totally. Everyone knows him for his intelligence and knowledge about this business, his witty humour but for me its his family values and beautiful upbringing that sets him apart as a person. I dont know if we realise it, we are same-same but different Thanks baba for being my bouncing board, my partner in crime and my true true true friend. Thankyou for understanding me even when I dont say anything! Thankyou for always listening, whether its my rubbish or my advice!! I hope this friendship continues forever, and also show in the beautiful love story we have made in Namaste England. No this is NOT a plug in for the film, this is an honest thank you note to my teacher, because baba you've truly taught me a lot (also because we will never say such nice things in person )! Love you! Now please RTGS 75 million my bank account by Monday thanks. @arjunkapoor

Namaste Englandis the second installment of the 2007 film Namastey London, which featured Katrina Kaif and Akshay Kumar in lead roles. The first installment was also directed by Vipul Amrutlal Shah.Namaste England is Arjun Kapoor's second collaboration with Parineeti. The duo have earlier worked together in the 2012 film Ishaqzaade.