Bhare Bazaar is the second song from the film Namaste England 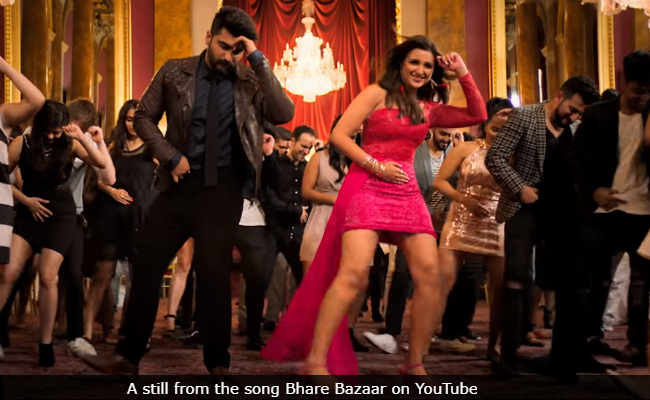 We were not even over Tere Liye yet and the makers of Namaste England released yet another song from the film, titled Bhare Bazaar. The song features the film's lead pair Parineeti Chopra and Arjun Kapoor grooving on the dance floor along with Badshah and it can arguably be termed as the party anthem of the year. The track has been sung by Vishal Dadlani, Payal Dev and Badshah and it has been composed by Rishi Rich and Badshah. It wouldn't be wrong to say that the highlight of the song is Arjun and Parineeti's chemistry. However, it is the signature step that caught our attention the most.

Bhare Bazaar is going crazy viral as it has over 187,830 views on YouTube already. Check out the track here:

Before the release of the song, both Arjun and Parineeti gave their fans a sneak peek of their look from the song along with the reminder that the song arrives today. Arjun Kapoor shared several posts and wrote: "Fun ka address likh lo! Bhare Bazaar out tomorrow." In a separate post, Arjun wrote: "I promise you, this one's worth the wait!"

Parineeti Chopra too shared a post related to the song and wrote: "Folding his hands in respect. Baba you need to greet me like this every morning. . ok peeps Badshah and Rishi Rich making us dance on their tunes!"

Namaste Englandis the second installment of the 2007 film Namastey London, which featured Akshay Kumar and Katrina Kaif in lead roles. Just like the first part, Namaste England has also been directed by Vipul Amrutlal Shah. The film marks Arjun and Parineeti's second collaboration after the 2012 film Ishaqzaade.