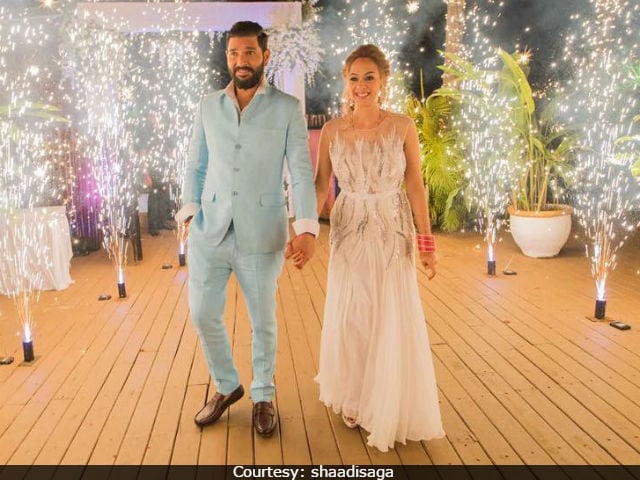 New Delhi: Cricketer Yuvraj Singh and his wife Hazel Keech have been asked to appear celebrity dance reality show Nach Baliye 8, reports Indian Express. The couple might enter the show as wild card contestants. "Yes, Yuvraj Singh and Hazel Keech have been approached to be wild card contestants. The creative team is in talks with them. Just that we need to work around the shoot dates with Yuvraj. If that gets sorted, they will enter the show after the second week," Indian Express quoted a source as saying. Yuvraj Singh is an avid dancer - one only has to look at his social media accounts for proof.

Yuvraj and Hazel married last November in a week of festivities that included wedding ceremonies in Chandigarh and Goa, mehendi, sangeet and parties attended by the couple's celebrity friends such as Virat Kohli and Anushka Sharma. Nobody had better moves on the dance floor than the groom. Check him out:

Hazel Keech, best known for her role in Bodyguard starring Salman Khan and Kareena Kapoor, has skills to match her husband's, as seen in the song Aa Ante Amalapuram from the movie Maximum.

Promoted
Listen to the latest songs, only on JioSaavn.com
Nach Baliye, in which celebrity couples compete on the dance floor, is in its eighth season and will start on April 2. Actress Sonakshi Sinha, filmmaker Mohit Suri and choreographer Terence Lewis will judge Nach Baliye 8. Ranbir Kapoor has been asked to host the first episode, though it hasn't been revealed if he will.

Easy To See Why Rashami Desai Is Trending. The Internet Loves Her Beach Pics