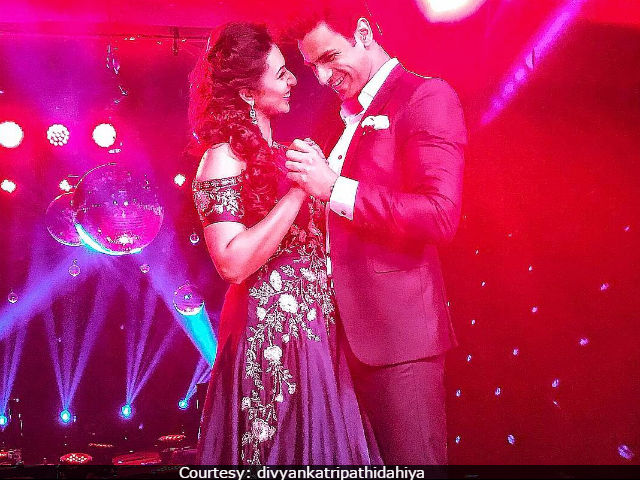 New Delhi: Television star couple Divyanka Tripathi Dahiya and Vivek Dahiya, are all set to give some serious competition to other couples on the couple dance reality show Nach Baliye 8. Divyanka shared a promo from the show on Instagram, in which, she runs to the sets to wish her 'pati,' a happy Holi. But, Vivek is tensed about, "What would we do in Nach Baliye?" to which Divyanka's answer is, "Romance karenge, dance karenge." Divyanka captioned the video as, "#RomanceWalaDance... with #Pati on #NachBaliye8." Divyanka Tripathi, the leading lady of TV serial Ye Hai Mohabbatein married her co-star Vivek Dahiya in July last year.

A post shared by Divyanka Tripathi Dahiya (@divyankatripathidahiya) on Mar 11, 2017 at 12:23am PST

Apart from Divyanka and Vivek, other couples like Sanaya Irani and Mohit Sehgal, Former Bigg Boss contestant Monalisa and her husband Vikrant Singh Rajput and Dipika Kakar of Sasural Simar Ka with her boyfriend Shoaib Ibrahim will also be part of the show.

Dipika and Shoaib also gave us a 'sneak peek' about their appearance on the show and said that they are 'ready for it.'

Its time to sway ourselves on the music of our love...and yesssss we are ready for it!!!!!! #SneakPeek

Promoted
Listen to the latest songs, only on JioSaavn.com
Monalisa also shared a picture from the photoshoot:

Meanwhile, Mumbai Mirror reported that TV actor Karan Tacker has replaced Karan Singh Grover as the host of Nach Baliye 8. The makers of the show reportedly had some creative differences with Karan Singh Grover. On hosting Nach Baliye 8, the EK Hazaaron Mein Meri Behna Hai actor told Mumbai Mirror, "This is the first time I will see it that too live. The format is being altered slightly, it'll be a little more straight-jacketed but fun."

Game Of Thrones Season 7: Ed Sheeran To Guest Star On The Show