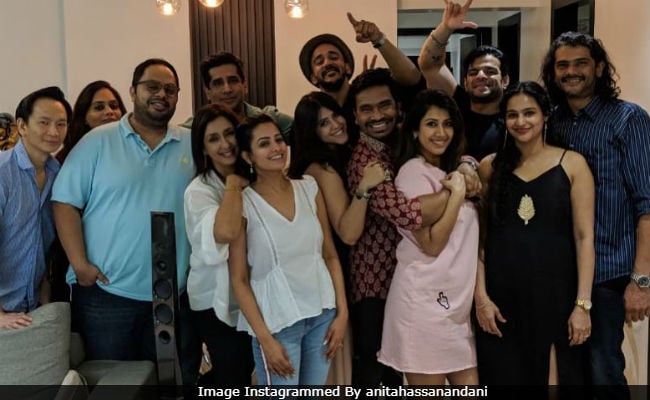 New Delhi: Television star Anita Hassanandani, who is all set to star in Naagin 3, hosted a housewarming party with husband Rohit Reddy for Ekta Kapoor, her Yeh Hai Mohabbatein co-star Karan Patel and wife Ankita Bhargava, Neena Kulkarni and other friends. Anita posted a picture from the get-together and captioned it as, "Blessed with the best." She and Rohit had also shared pictures of their new home on their Instagram stories. "Congratulations to the two people we love the most... Anita & Rohit for their new love nest, where the study is the best room in the house," Karan Patel, who also shared a picture from the party, wrote. He and wife Ankita are expecting their first child.

Ekta Kapoor, with whom Anita has collaborated for shows like Kabhii Sautan Kabhii Sahelii (debut), Kkavyanjali, Yeh Hai Mohabbatein and now Naagin 3, wrote, "Not because what a huge palatial house you both bought, I congratulate you because together you both built it into beautiful home."

#Blessed with the Best!

Congratulations to the two ppl we love the mostest .... Anita & Rohit for their new love nest ... where the STUDY is the BEST ROOM in the HOUSE. #NewHouse #NewBeginings #BFFs

Not because wat a huge Palacial house u both bought ... I congratulate u ...cause together u both built it into beautiful home

The much-anticipated Naagin 3, also starring Karishma Tanna and Surbhi Jyoti, will begin from June 2. Veere Di Wedding stars Kareena Kapoor, Sonam Kapoor, Swara Bhasker and Shikha Talsania will be the special guests on the first day of the show.

Promoted
Listen to the latest songs, only on JioSaavn.com
Veere Di Wedding, which releases on June 1, is co-produced by Ekta Kapoor and Rhea Kapoor (Sonam's sister).

Anita Hassanandani currently plays Shagun in Yeh Hai Mohabbatein, which is headlined by Karan Patel and Divyanka Tripathi. She will feature as a 'snake woman' in Naagin 3.