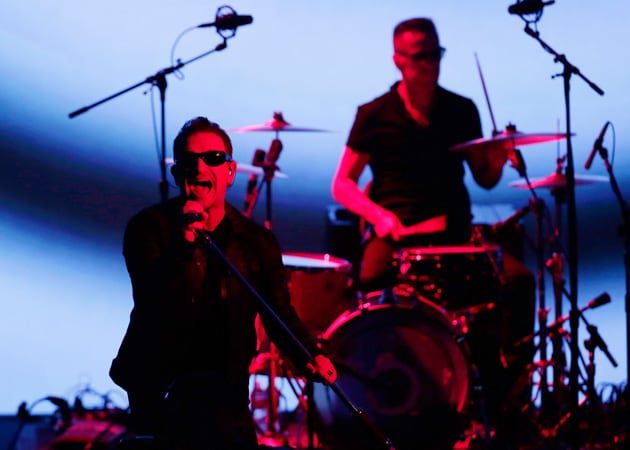 Everything about U2's new album is unexpected. U2 members Bono and Larry Mullen Jr perform during an announcement of new products by Apple. (Image courtesy: AP)

Everything about U2's new album is unexpected. Like it's very existence, for one, after the Irish rock band dropped it on iTunes users on Tuesday in a surprise move.

Then there's its intriguingly narrow and personal scope. And its playful musical adventurousness, which amounts to a smooth shifting of gears over variable terrain on a road course as the group works through songs inspired by things that seemingly have little do with each other. Each, however, is an experience from youth and young manhood for singer Bono, guitarist The Edge, bassist Adam Clayton and drummer Larry Mullen Jr. (Also Read - Apple Surprise Bonus: U2 Launches Songs of Innocence, Free on iTunes)

Anthemic opener The Miracle (of Joey Ramone) is a tribute to The Ramones, the band that fired Bono's imagination as a teen. The band wraps punk-like power chords in its usual finery and transforms a monosyllabic garage rock "ohohohoh" chorus into an ethereal gospel-tinged hallelujah. "Everything I ever lost now has been returned, the most beautiful sound I'd ever heard," Bono sings.

California (There is No End to Love) , a song about the band's first trip to Los Angeles, is a modern take on The Beach Boys with a hallucinatory opening consisting of the band chanting "Barbara Barbara Barbara Santa Barbara" in the round before launching into one of those trademark power ballads that feel like a jet plane racing to the horizon.

Along the way, we visit with Bono's late mother on the soaring Iris (Hold Me Close) , steal a first kiss on Song For Someone, experience terrifying violence in the streets of Dublin on the visceral Raised By Wolves, visit the old neighborhood on the wonderfully bombastic Cedarwood Road and take their life's mission from The Clash on the funky and bright This is Where You Can Reach Me Now.

The album was produced by Danger Mouse with assistance from others; including Adele collaborators Paul Epworth and Ryan Tedder and longtime U2 associate Flood. Their fingerprints are all over the place - there's baroque synthesizer throughout, jangling ghost guitars and a general retro feel to the rhythm section. But even with all those outside collaborators in the room, it remains a distinctly U2 record - soaring, upbeat and often transcendent.

Songs of Innocence is just the fourth album for the band this century - and the first since 2009's No Line on the Horizon. While it continues the general musical trend of the last 15 years, there's no question there's more energy here, more inspiration and more to be excited about than anything since Beautiful Day - and it's hard to believe it's been 14 years since the band released that latter-career high-water mark.

In a letter to fans, Bono says the group finished the album a week ago, delivering it with unimaginable speed, and teased another imminent album Songs of Experience.

Promoted
Listen to the latest songs, only on JioSaavn.com
"We really went there. It's a very, very personal album," Bono wrote. "Apologies if that gets excruciating actually, I take that back. No apologies if it gets excruciating. What's the point in being in U2 if you can't go there?"

There's a lesson in that statement for everyone else in the game. Pay attention.