"Shah Rukh Khan wouldn't need to do such stunts any longer," wrote Mumbai Police on Twitter 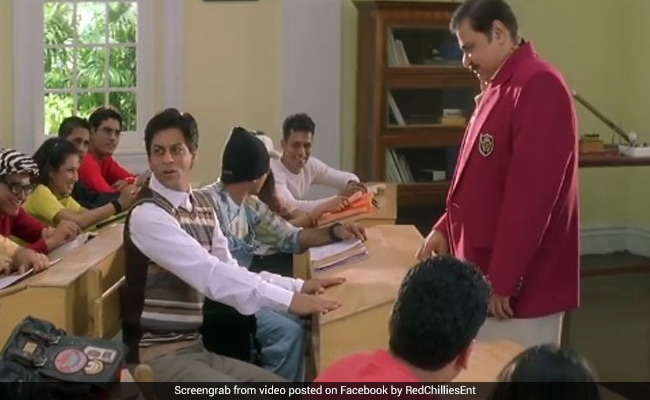 Mumbai Police's tweets are getting more amusing by the day. The official Twitter handle of Mumbai Police is taking reference from popular movies to explain the dos and don'ts to be followed at the time of coronavirus lockdown. To urge people to wear masks, Mumbai Police tweeted a snippet of Shah Rukh Khan's 2006 action drama Main Hoon Na featuring Shah Rukh Khan and Satish Shah. Satish Shah famously played the character of Professor Rasai who spat when he spoke and Shah Rukh Khan played the role of his student, in the film. In the video, Shah Rukh Khan can be seen doing a backward bend to dodge the saliva droplets coming from Satish Shah. Sharing the hilarious snippet, Mumbai Police wrote the tweet, "Shah Rukh Khan wouldn't need to do such stunts any longer - Mask Hai Na!" We can't wait to see Shah Rukh's reaction to the tweet. Take a look:

.@iamsrk wouldn't need to do such stunts any longer - Mask Hai Na! pic.twitter.com/8lHfCtJgye

Seems like Satish Shah is the favourite reference for everyone to explain the dos and don'ts during the coronavirus pandemic. A few days back, Shah Rukh Khan shared a unique video message on social media where Satish Shah's character from Main Hoon Na was used to demonstrate how the virus spreads by coughing and sneezing. He said, "If someone coughs or sneezes around you without covering their face, you know what to do."

InshaAllah #JantaCurfew will help against the spread of virus, though we may have to do this again. The clapping brought so much cheer. So a reminder of safeguards, with some cheer... Pls take it in the right spirit. To all relentlessly working today - Extremely Grateful. Thx!

Mumbai Police, on Sunday, shared another tweet featuring a video from Main Hoon Na where a classroom full of students can be seen trying to dodge Satish Shah as he spat on their face while he spoke to them. "This class (well, almost all of them) was prompt to learn its lesson from Shah Rukh Khan's encounter with Professor Rasai! #MaskHaiNa."

This class (well, almost all of them) was prompt to learn its lesson from @iamsrk 's encounter with Professor Rasai! #MaskHaiNahttps://t.co/HpHoOHnYZBpic.twitter.com/FarmS6CyIK

As of Monday, the total number of positive cases of COVID-19 in India stand over 9100.