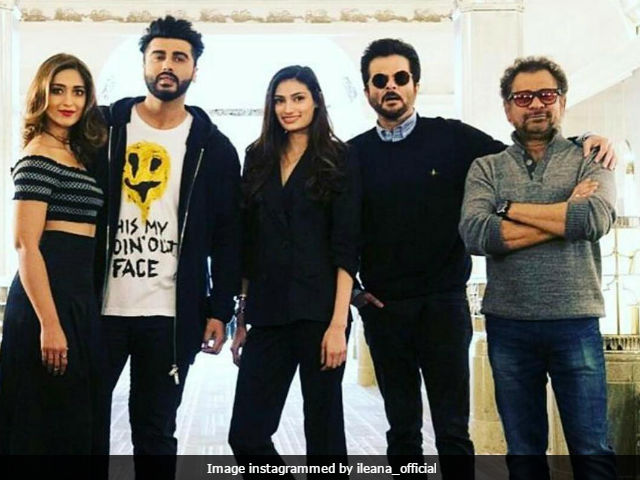 New Delhi: Actress Ileana D'Cruz is having a great time shooting for Anees Bazmee's Mubarakan in London. The 29-year-old actress has been posting several pictures with her co-stars Anil Kapoor, Athiya Shetty and Arjun Kapoor on social media. On Wednesday, the Barfi! actress shared a black and white picture of Anil Kapoor along with Arjun and Anees Bazmee announcing that the shoot for Mubarakan is nearing completion. The image has been captioned: "3 days to go Mubarakan wraps!!! #Mubarakan 28th July!(sic)" Anil Kapoor and Arjun Kapoor will be seen sharing the screen space for the first time. Arjun will play Anil Kapoor's nephew in the film, like they are in real life.

See the picture shared by Ileana D'Cruz below :

Mubarakan is Anil Kapoor's fifth collaboration with filmmaker Anees Bazmee. They have previously worked together in films such as - No Entry, Welcome, No Problem and Welcome Back.

Arjun Kapoor was last seen in Ki and Ka co-starring Kareena Kapoor. The 31-year-old actor is currently awaiting the release of his film Half Girlfriend along with Shraddha Kapoor. The film, directed by Mohit Suri, is based on Chetan Bhagat's novel of the same name. The film is scheduled for release on May 19.