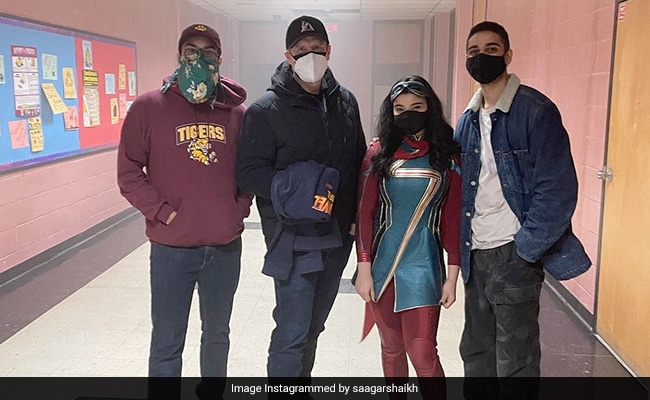 Ms Marvel – the latest offering from the Marvel Cinematic Universe – has garnered international acclaim for its storytelling and inclusivity. Featuring a cast of predominantly Pakistani and Indian actors, Ms Marvel tells the story of Kamala Khan [played by Iman Vellani], a Pakistani-American teenager who is also the MCU's first-ever Muslim superhero. With the series having drawn to a close with the finale episode released on Wednesday, the cast and crew of the show have shared posts revisiting the making of the series. Now, Saagar Shaikh, who plays Kamala's elder brother, Aamir in the show, has shared a bunch of pictures from the sets of Ms Marvel featuring his co-stars Iman Vellani and Yasmeen Fletcher, among others.

In the pictures, the cast is goofing around, with some actors taking a nap and others even posing for selfies amid the shoot. In his note, Saagar said, “Thank you all so much for the love and the support you have given to this show. It's been one of the most incredible journeys of my life and I'm so proud and thankful for everyone that worked so hard to make this happen.”

Replying to the post, actress Anjali Bhimani said, “Such a joy to share it with you.” Saagar's co-star Yasmeen Fletcher said, “My dad and I having the same amount of screen time in this post is incredible.”

A few weeks ago, on the occasion of Eid, Saagar Shaikh shared another set of images from the sets of the show. Posting the images, Saagar said, “‘The lesser Eid' which is actually the greater Eid but we just didn't really get as many gifts or Eidi so it felt not as great.”

Ahead of the finale episode of the show, the cast of Ms Marvel shared a message with fans. In a video released by the official Instagram page of Ms Marvel, Iman Vellani begins by saying, “It's finally time for the season finale. I don't really know how it feels. I feel weird to think that the last two years of my life came down to this moment on a random Wednesday in July is like truly very, very special.”

Iman further said, “This episode means a lot to me as a fan, as a Pakistani, as a teenager...Actually as a human in general. Yea, lots of tears went into making this. Happy and sad. Also, exploding brains and just pure infectious genuine love.”

The first season of Ms Marvel is available for viewing in India on Disney+ Hotstar.