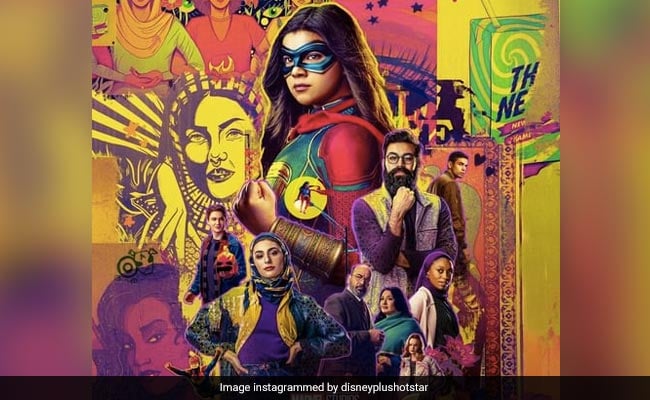 The Marvel Cinematic Universe has expanded its horizons and introduced us to Ms Marvel, its first-ever Muslim superhero in the form of a Pakistani-American teenager Kamala Khan. Kamala, played by Iman Vellani, is like most other immigrant kids her age in the USA -- trying to make sense of her South Asian roots while growing up in New Jersey and keeping up with her favourite pop culture happenings. So as she convinces her parents to let her attend an AvengerCon, Kamala is a relatable superhero for immigrants and South Asians across the world. One of the other exciting elements of Ms Marvel is the blend of seasoned actors and newcomers in the six-episode series.

Take a look at some of the actors that play pivotal roles in the film.

Iman Vellani plays Kamala, a Muslim teenager growing up in Jersey City. This is Iman's first acting gig and as per a video shared by Marvel, the actress was told she got the coveted role over a Zoom call.

While details of Farhan Akhtar's role have still been kept under wraps, the actor shared a video on Instagram in which he is seen wearing a robe and sporting a beard, looking like a suave philosopher. He even quotes Rumi and says, “What you seek is seeking you!"

Actress Zenobia Shroff plays Muneeba Khan, Kamala's mother. Zenobia is best known for her work in theatre in Mumbai under the mentorship of the legendary Pearl Padamsee. She has worked on projects such as Ek Main Aur Ekk Tu, Big Sick, The Affair, The Resident, and Madam Secretary.

Mohan Kapur, a familiar face in Indian cinema and television, plays the role of Yusuf Khan, Kamala's father. He has appeared in films such as Happy New Year, Mission Mangal and Jolly LLB, among others.

Celebrated Pakistani actress Nimra Bucha appears in the role of Najma. Not much has been shared about her role but we see her throwing a punch or two in the trailer. Nimra is best known for her role in critically acclaimed projects such as Churails and Manto. She was last seen in the film Kamli, which is currently receiving rave reviews in Pakistan.

As Aamir Khan, Saagar Shaikh plays the role of Kamala's elder brother. He has appeared previously in shows such as Just Giggle It and Unfair & Ugly.

Matt Lintz is Bruno Carrelli, one of Kamala's closest friends and her confidant. The actor has previously appeared in Walking Dead and What to Expect When You're Expecting, among others.

As Nakia Bahadir, Yasmeen Fletcher is another of Kamala's closest friends. She played a role in the film Let Us In.

Rish Shah as Kamran is that one guy in high school that Iman's character has the biggest crush on. The British actor has previously acted in Emmerdale, Casualty and Russell T Davies' Years and Years.

In Fawad Khan's case too not much has been revealed about his character but the actor will reportedly play an important role in the superhero universe. In an interview with India Today, the co-creator of the series Sana Amanat has said that the presence of stars like Fawad Khan and Farhan Akhtar has "lent gravitas to the project" and more people in the Western world will turn fans of the actors.

Similarly, Pakistani star Mehwish Hayat will also play a role in the series but the actress and makers have not shared any details about her character. "Working on Ms Marvel and being part of the MCU is a dream come true for me!" she said in a post. She is known for her work in films such as Actor in Law, Punjab Nahi Jaungi, Load Wedding, and Chhalawa.

Watch the trailer of the show here:

You can stream Ms Marvel on Disney+Hotstar from June 8.