Ahead Of The Finale, Ms Marvel And Co-Stars Have Messages For Fans

The ultimate finale will release at 12:30 pm on Wednesday on Disney+ Hotstar 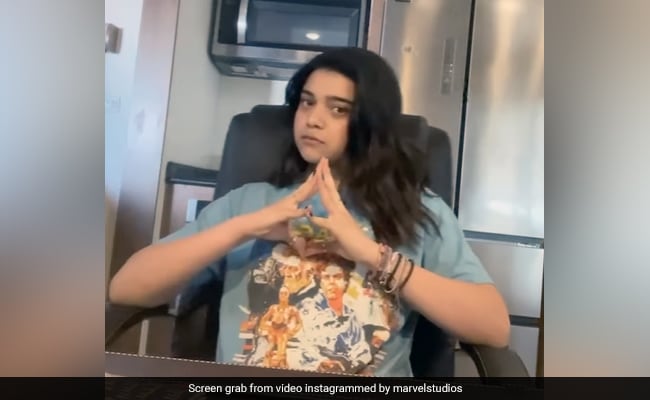 Iman Vellani in a still from the video. (courtesy: marvelstudios)

Ms Marvel fans, or we should say cosmic fans, we have some fantastic news in store for you. On the finale day, everyone's new favourite Night Light aka Kamala Khan and the Ms Marvel cast have come up with special messages. What is it all about? Just a simple one. Don't miss the “epic” final episode. Well, nobody would want to do that. The video messages were shared by Marvel Studios on Instagram. It opens with Iman Vellani, who plays the titular character in the series. She said, “It's finally time for the season finale. I don't really know how it feels. I feel weird to think that the last two years of my life came down to this moment on a  random Wednesday in July is like truly very, very special.”

She added, “This episode means a lot to me as a fan, as a Pakistani, as a teenager...Actually as a human in general. Yea, lots of tears went into making this. happy and sad. Alos exploding brains and just pure infectious genuine love.” And, fans were quick to point out that Ms Marvel is wearing a Star Wars T-shirt.

Next, we have Yasmeen Fletcher and  Laureel Marsden, who play Nikia Bahadir and Zoe Zimmer, respectively. And, they just can't wait for us to watch the final episode. “we are so, so excited for you to watch episode 6, which is going to be pretty wild,” Yasmeen Fletcher said on behalf of both the stars.

And, then we have the message from Aisha, played by gorgeous Mehwish Hayat. Thanking fans for giving so much love to her character, she said, “I cannot begin to thank everybody for the way you have taken Aisha to heart. I absolutely loved playing her and was so touched that her story resonated with so many people out there. Thank you for all the love and now get ready for the final epic, episode. I promise you that you will not want to miss this.”

Zenobia Shroff, who plays Muneeba Khan in the series, has a message too. So far we have seen that Muneeba is not happy with her daughter Kamala Khan's interest in Aisha, her great-grandmother. It was only in the last season that Muneeba discovered that Kamala is the Night Light. And, now, Muneeba has thrown a few questions at us. She said, “Where do you think Muneeba Khan is in her journey? Do you think she is on board now with Kamala's powers? Or do you think they are still going to have conflict?” For all the answers, Muneeba added, “I guess you have to watch the finale.”

Trvaina Springer, Rish and Matt Lintz have also come up with video messages for fans to watch the “epic” episode.

The ultimate finale of Ms Marvel Season 1 will release at 12:30 pm on Wednesday on Disney+ Hotstar.

Ms Marvel Review: An MCU Entry That Will Always Be Regarded As A Watershed