Attention Please, Mouni Roy Needs Your Help With Her Caption

The actress shared the fun images with her fans on Instagram. 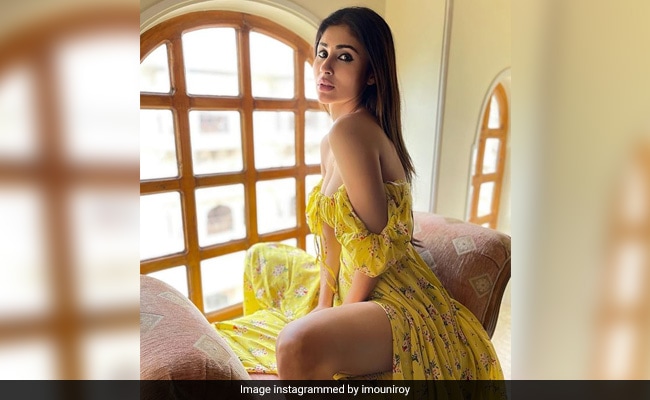 If you need a quick fix for your dull Monday, we recommend that you head right away to Mouni Roy's Instagram. The stunning actress has left us basking in the glow of her effervescent charm as she poses in a picturesque location. Whether coquettishly posing on a settee or showing off her curves by standing against a wall, Mouni has our entire attention. And if and when you manage to take your eyes off her, she has a task for you. Yes! The self-confessed music and dancer lover has gone ahead and reworked the lyrics of the 1930's classic, The Lady Is A Tramp to suit her mood.

And nudging her fans to join in on the fun, she has left the caption incomplete, asking them to "finish the sentence". In the caption, she wrote, "I get too hungry for breakfast at eight. I like the theatre so never go late. I read a book wide, wide awake. That's why... (Finish the sentence)."

In a second set of photos that Mouni shared, she expressed exactly what she was feeling with the help of another song. This time around, she quoted the Frank Sinatra classic, It's A Wonderful World in her caption. She wrote, "It's a wonderful world. I'm just walking on air. Talk of heaven on earth. I've got more than my share. Haven't got a care. Happy all day through. It's a wonderful world. Loving wonderful you…"

The actress recently also posted pictures of a palatial set while being dressed in regal lehengas and jewellery pieces.

Although she isn't spilling much about what she is working on, we often catch a glimpse of what is going on behind the camera thanks to her posts. Once, Mouni also posted a video where she was painting someone's hands using a red marker. Her caption told us that the marker was a substitute for the red liquid, alta, that is traditionally used to decorate women's hands, on special occasions.

Giving us major vacation goals, the Naagin actress had travelled to Dubai earlier this year. While she has given us many snippets from her time there, she just can't seem to get over Dubai. She did a photo dump only five days ago to look back at her fabulous time spent there.

The actress will next be seen in Ayan Mukerji's much-awaited film Brahmastra. The film features Ranbir Kapoor, Alia Bhatt and Amitabh Bachchan.