Mouni Roy Is A Modern-Day Juliet - But Where Art Thou, Romeo? 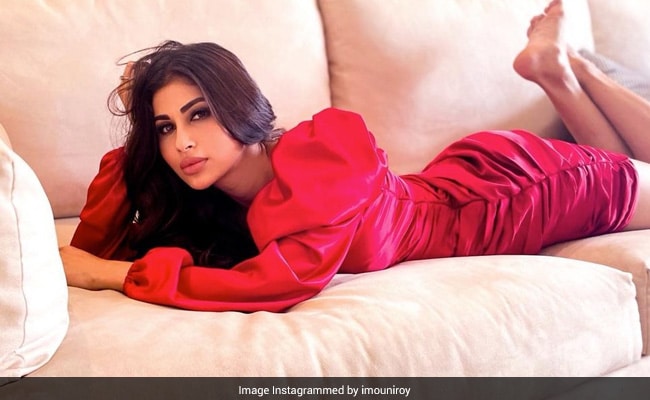 The Internet just got their modern-day Juliet in Mouni Roy. The actress painted her Instagram feed red with a series of stunning pictures in a mini dress. The fashion icon is seen lazing around on a couch. But it's the caption that caught everyone's attention. She quoted lines from the famous Shakespearean play, Romeo And Juliet. It reads, "Red, But soft! What light through yonder window breaks? It is the east, and Juliet is the sun...Romeo and Juliet, William Shakespeare." Mouni posted more breath-taking snaps from this glamorous photoshoot and captioned them as, "Smile because it's right under your nose. Good day, you all ."

Fans are much interested in Mouni's real-life 'Romeo' Suraj Nambiar, who is rumoured to be a Dubai-based banker. Mouni reportedly met his parents and the couple is planning to tie the knot soon.

The Naagin actress recently posted an Instagram Reels where she wore a gorgeous black outfit. The 35-year-old beauty was seen twirling and running in slow motion, with OK Jaanu's Sunn Bhavara song playing in the backdrop. In another clip, Mouni stunned everyone in a body-hugging slip dress.

Mouni will be next seen in Ayan Mukerji's fantasy film, Brahmastra. The movie has an ensemble cast of Ranbir Kapoor, Alia Bhatt, Amitabh Bachchan, Nagarjuna and Dimple Kapadia.

Mouni recently expressed gratitude for the opportunity to work in Brahmastra. She told Pinkvilla, "It has been a beautiful experience. I really consider myself lucky to be working with the entire cast and crew of Brahmastra honestly. And, I cannot wait for it to come out."

Up next for Mouni is Penthouse. The show marks the digital debut of director duo Abbas-Mustan. Bobby Deol, Sharman Joshi, Arjun Rampal, Tisca Chopra are a part of the project. Mouni also has Koi Jaane Na, featuring Kunal Kapoor and Amyra Dastur, in her lineup. The film will release on April 2.