"Ajay gave the nod within minutes of the narration," said a source close to the project 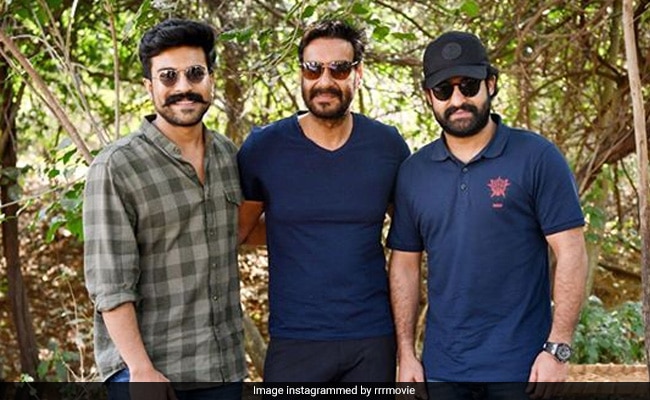 Ajay Devgn with Ram Charan and Jr NTR on the sets of RRR. (Image courtesy: rrrmovie)

Actor Ajay Devgn will reportedly play onscreen mentor to Ram Charan and Jr NTR's characters in SS Rajamouli's work-in-progress film RRR, as per a Mumbai Mirror report. A source close to the project said that Ajay Devgn has an extended cameo in the period film and he will appear in the film's flashback portions. The source said, "Ajay has shot for around 10 days at Ramoji Film City in Hyderabad, where Delhi from the 1900s was recreated. He appears in the flashback scenes." RRR is the fictionalised retelling of the story of India's freedom fighters, Alluri Sitarama Raju and Komaram Bheem, played by Ram Charan and Jr NTR respectively.

"Ajay gave the nod within minutes of the narration. Though it is an extended cameo, his track will remind one of his National Award-winning performance in The Legend of Bhagat Singh and sets the tone for the drama involving the two leads," he added.

The source also told Mumbai Mirror that the filming with resume as soon as the government stipulated safety measures with respect to the COVID-19 pandemic are in order. "Around 25 per cent of the shoot still remains. With Ramoji Film City and other studios in Hyderabad opening up for shoots, Rajamouli is expected to resume work as soon as Standard operating Procedures are in place. Given the scale, it's a difficult film to shoot and the makers are exploring different options. They are planning a two-day test shoot in Gandipet without the lead actors later this week," the source said.

The film, which was earlier scheduled to hit the screens January 2021, will get a new release date. "The team is figuring a release towards April end, like Bahubali 2: The Conclusion which was unveiled on April 28, 2017. Of course, this would depend on when the shoot resumes and how long post-production takes," the source said.