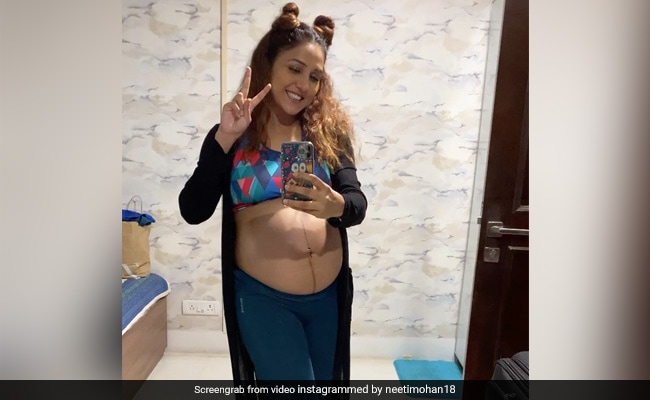 Neeti Mohan in a still from the video. (courtesy neetimohan18)

Singer Neeti Mohan, who is expecting her first child, shared a post from her maternity diaries on Instagram on Thursday. In the video, the singer can be seen working out, posing for the camera. She captioned the post: "Mommy to be in Full form ( I mean round)." In the comments section of her post, Neeti's sister and dancer Shakti Mohan wrote: "Fit momma." Her Instafam flooded the comments section of her post with heart emojis. Neeti Mohan and Nihaar Pandya's got married on February 15, 2019 at the Falaknuma Palace in Hyderabad.

The couple announced their pregnancy in February with a super cute post. "1+1= 3. Mommy to be and daddy to be. What better day to announce than our second anniversary," Neeti Mohan wrote sharing the picture.

Nihaar Pandya and Neeti Mohan met at a friend's wedding. During an episode of Kapil Sharma's talk show, Nihaar said: "A friend was a part of Aasma - the band that Neeti also had an association with. I always asked that friend to introduce me to Neeti, but it never happened. Surprisingly, at the same friend's wedding in Goa, almost a year ago, I met Neeti formally. I was in love with her... There on started our love story."

Neeti Mohan is best-known for singing popular tracks like Jiya Re, Ishq Wala Love and Saadi Galli Aaja on her resume as a singer. Nihaar Pandya is a model-turned-actor, who featured in films such as Manikarnika: The Queen Of Jhansi.