"Recreating one of my favorite Met Gala looks ever," wrote Mindy Kaling 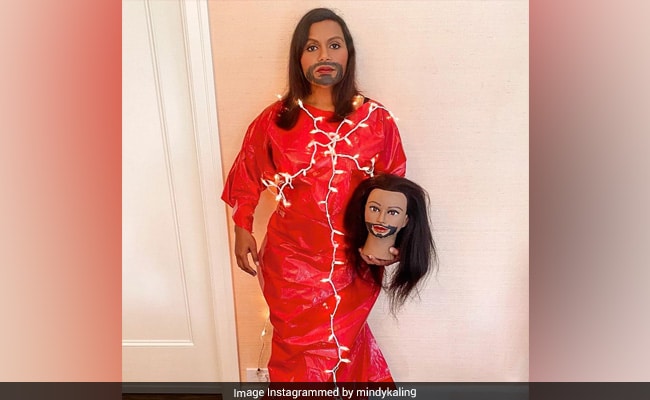 Some red carpet looks last with you forever and on Jared Leto's 2019 Met Gala look is the finest example of that. The Suicide Squad actor showed up in a red Alessandro Michele gown with a jewel-encrusted bodychain, last year. But what stole the show had to be his human head accessory. A year later, comedian-actor Mindy Kaling recreated that look at her house in a make-shift way. Mindy shared a photo on Instagram of her version of Jared Leto's famous 2019 Met Gala look, complete with a mannequin head that had a beard drawn on it to match. She had a string of fairy lights attached through a packing tape. Sharing the picture on her Instagram profile, Mindy wrote: "Recreating one of my favorite Met Gala looks ever with the help of a tarp, some Christmas lights and packing tape. I think Alessandro Michele would approve." In the comments section of Mindy's Instagram post, Jared Leto left a black heart emoji.

Recreating one of my favorite Met Gala looks ever with the help of a tarp, some Christmas lights and packing tape. I think Alessandro Michele would approve. Your turn, post your look with #MetGalaChallenge by 5/3 and @voguemagazine will choose select looks to feature on social.

The 2020 Met Gala, which was scheduled to take place on May 4, has been postponed indefinitely due to the COVID-19 pandemic, reported CNN.com. The annual red carpet event, hosted by Vogue's editor-in-chief Anna Wintour, is a celebrity-packed fundraiser for the Costume Institute at the Metropolitan Museum of Art. Bollywood stars Priyanka Chopra and Deepika Padukone have been regular attendees at the fashion gala for the last few years.