Milind Soman And The Pyramids In Ultimate Egypt Holiday Pic 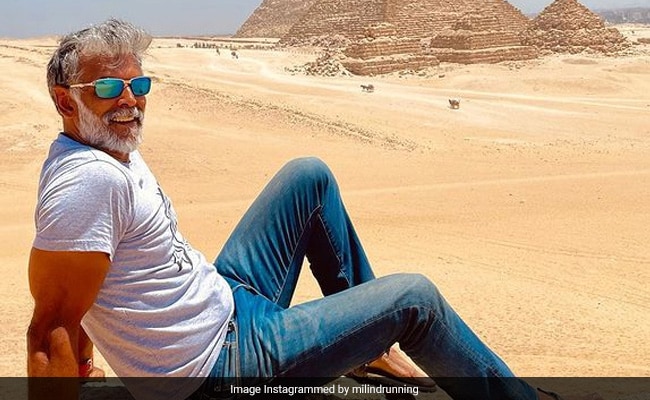 Actor and veteran model Milind Soman is an avid traveller. And he shares this passion of exploring new destinations with his wife Ankita Konwar. The couple recently travelled to Egypt and also treated fans to several pictures from the dreamy vacation. Now, adding to the Egypt travel album, Milind Soman has shared a new post featuring a glimpse of the majestic pyramids. Posing in front of the pyramids, Milind Soman penned a note about them. He wrote, “Giza. The pyramids of Pharaohs Khufu, Khafre and Menkaure are incredibly awesome. Built almost 5000 years ago but no modern scientist knows for sure how … The Great Pyramid contains 2.3 million individual blocks of stone, meaning one block would have to be laid every five minutes of every hour, 24 hours a day, for the entire 20 years that it took to build. The problem? Each block weighs at least 2000kg!”

Milind Soman also shared that the photo was clicked by wife Ankita. He added a geotag that said, “Giza Pyramid Complex.”

While in Egypt, Milind Soman also went scuba diving and shared a fun video of himself resting on the sea bed in his diving gear. In a video that contained the note, “Chilling on my sea bed,” Milind Soman said, “Waiting for the dolphins to come out and play.”

In another post with a getag pointing to the Red Sea, Milind Soman shared two pictures featuring him and Ankita Konwar taken a decade apart. In the caption he said, “These two pictures were captured candidly by two different people on two very different days and yet they speak the same language, the language of love. Almost a decade together and we are still lost in each other !May we always have this.”

Milind Soman is known for his work in films such as Chef, Bajirao Mastani and 16th December, among others.