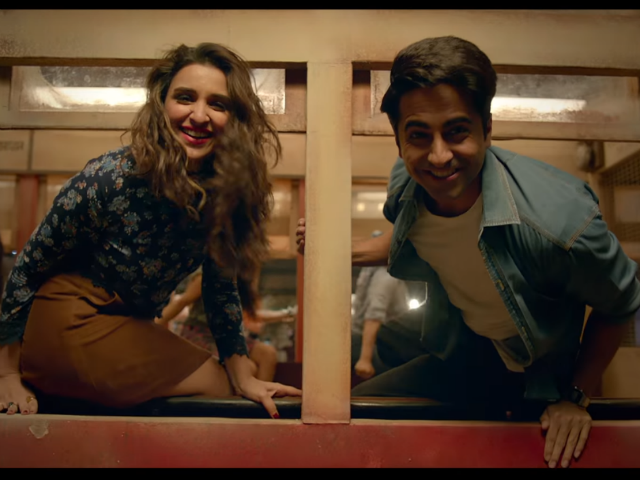 New Delhi: The latest song of Meri Pyaari Bindu, Yeh Jawaani Teri, picturised on the film's lead pair Ayushmann Khurrana and Parineeti Chopra, is energetic, peppy and fun. Set in the Seventies and Eighties, the song is a tribute to music composer Bappi Lahiri, Bollywood's Disco King. At a time when Bollywood is rehashing songs from that era, Yeh Jawaani Teri is refreshingly original. The song kicks off with Ayushmann Khurrana aka Abhi, who breaks into a jig against the backdrop of a mural of Bappi Lahiri. The set, which resembles an abandoned warehouse, complete with structures of Kolkata buses and trams, adds to the feel of the song. Not to miss the hand rickshaw, one of the most popular modes of transport of Kolkata. Sung by Jonita Gandhi and Nakash Aziz, the song is replete with vigour and the retro charm. The music has been composed by Sachin-Jigar. Here's the song.


The infectious energy of Ayushmann Khurrana and Parineeti Chopra cannot be missed either. The two does complete justice to Jonita Gandhi and Nakash Aziz, as they shimmy around and shake a leg in Shammi Kapoor style.

Promoted
Listen to the latest songs, only on JioSaavn.com
Haareya, Meri Pyaari Bindu's first song, was released last week. Sung by Arijit Singh, the song underlines how Bindu has found a permanent place in Abhi's heart.

Meri Pyaari Bindu, directed by Akshay Roy, revolves around Abhimanyu, who narrates the story of Bindu, an aspiring singer, who dreams of becoming a rockstar someday. The film also stars popular Bengali actors Aparajita Auddy and Rajatava Dutta. The film has released five trailers so far, presenting the chapters of a book that Abhi is writing.

The film will release on May 12.