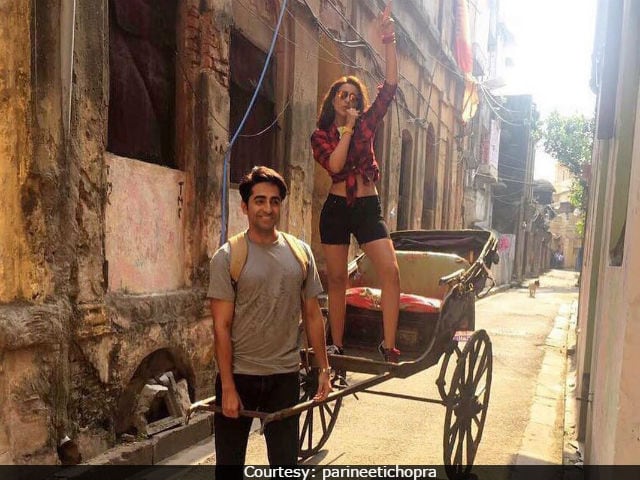 Parineeti and Ayushmann photographed on the sets of Meri Pyaari Bindu (Courtesy: parineetichopra)

New Delhi: Actress Parineeti Chopra, who is making her singing debut with her upcoming film Meri Pyaari Bindu, revealed that her new song will be unveiled tomorrow. "So excited to share with you all - My singing debut is out tomorrow!!!! Maana ke hum yaar nahin .... goosebumps #MeriPyaariBindu. (sic)," wrote the actress on Instagram with a picture of hers. The song titledMaane Ke Hum Yaar Nahi will release on Tuesday afternoon. Parineeti co-stars Ayushmann Khurrana in Meri Pyaari Bindu, who also shared about the actresses' singing debut. "She's my new favourite singer. You'll say the same when you listen to @ParineetiChopra's 1st song #MaanaKeHumYaarNahin out tomorrow (sic)." The Vicky Donor actor wrote.

Check out Parineeti and Ayushmann's posts:

SO EXCITED to share with you all - My singing debut is out tomorrow!! #Goosebumps#MaanaKeHumYaarNahiSong#MeriPyaariBindupic.twitter.com/83ZoHGGPvd

She's my new favourite singer. You'll say the same when you listen to @ParineetiChopra's 1st song #MaanaKeHumYaarNahinSong OUT TOMORROW pic.twitter.com/rvB4UybQNS

Of Parineeti's singing debut, Ayushmann earlier told news agency IANS, "I think she is top-notch and pretty good. She has taken classical training in music. She knows a lot about music. I was surprised when I discovered her singing talent for the first time. I think she should sing more often."

Speaking about her singing debut Parineeti told Hindustan Times, "Thankfully, I think I performed okay for the first song. I am excited as it has been a lifelong dream but I never thought I would be a playback singer. I always wanted to sing my own song so I am happy."

Promoted
Listen to the latest songs, only on JioSaavn.com
Meri Pyaari Bindu is set in Bengal and tracks the love story of Parineeti and Ayushmann.

Apart from Meri Pyaari Bindu, Parineeti Chopra, who made her Bollywood debut with Ladies vs Ricky Bahl in 2011, will also be seen in Golmaal Again.