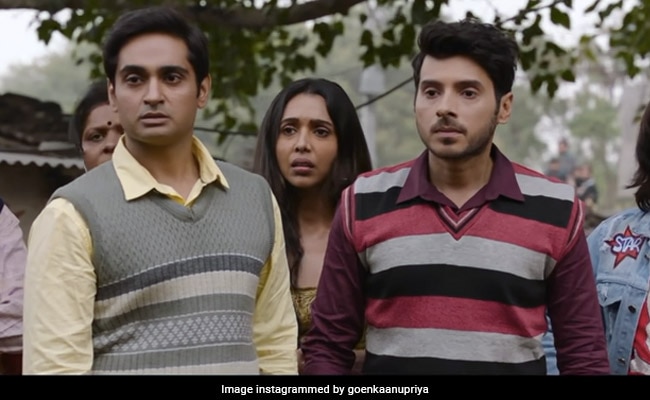 Two engineering grads struggling to find a foothold in cutthroat Mumbai contemplate suicide in the opening moments of Mere Desh Ki Dharti, written and directed by Faraz Haider. They are the lead characters, so there is no real danger of their plan succeeding. The film then goes back a bit in time to reveal why the duo is in such desperate straits.

Once those details are out of the way, Ajay (Divyenndu) and Sameer (Anant Vidhaat) end up in rural India. There, they stumble upon the harsh reality of farmer suicides. Their own sorry plight pales in comparison with what the tillers of the land are going through. They decide to ignore their own troubles and do something about the agrarian crisis in a village situated off the town of Salamatpur, Madhya Pradesh.

Mere Desh Ki Dharti, out in the theatres, is a satirical drama that looks away from the phenomenon of village-to-city migration and turns the spotlight on two young men who, having lost the rat race in a big city and run out of all options, wend their way to a rural area devoid of young, able-bodied men.

The old and infirm left behind in the farming village are at the mercy of greedy businessmen, heartless bankers and exploitative middlemen. With farming yielding very little by way of returns, the villagers are in danger of defaulting on their loans and losing their land.

Ajay and Sameer know what loss means. The former has lost his job on the charge of stealing his employer's clients for his proposed start-up. That latter is summarily dismissed when gives his boss a piece of his mind after being denied a promotion.

Neither is that all. Ajay's father has disowned him and Sameer's girlfriend, daughter of a successful agricultural products exporter, has ditched him. The two 'losers' decide to get away from Mumbai and find a peaceful place where they can end their life.

A ticketless train ride deposits them in Salamatpur, where chirpy bandmaster Pappan Khan (Inaamulhaq) is, in a case of mistaken identities, waiting to receive them. Ajay and Sameer play along and accompany their new friend to a wedding in the village.

The hamlet presents its own set of problems and the two outsiders are quickly drawn into the maelstrom. The sight of a farmer driven to suicide by the burden of debt - his lifeless body from a tree - hits them hard. They figure out that they cannot run away anymore.

Mere Desh Ki Dharti deals with a declining GDP, mounting unemployment, the rising cost of cultivation, and exploitative systems that rob villagers of their dignity. These aren't problems that one can sweep under the carpet. Ajay and Sameer plunge right in looking for a solution. Most of the film's post-intermission drama stems from the difficulties that they must reckon with as they try to convince the old farmers to adopt new agricultural methods.

The solemn issues that Mere Desh Ki Dharti addresses are undoubtedly relevant, but the script that the director presses into the service of highlighting the grave crisis that agriculture faces in this country veers towards broad melodramatic strokes of the conventional kind. The burden of the film's principal message not only gets lost a tad in the process, but it is also undermined in terms of weight and impact.

The two male protagonists advocate collective farming, which, on the face of it, does not sound like a bad idea. But when, in the same breath, corporatisation is touted as a magic wand for waving away all problems, the film appears to be deliberately playing up neo-liberal claptrap. It is tantamount to asking the poor cornered farmers to cede even more control of their fate than they have already done.

When an infuriated bank manager gives the village a six-month ultimatum - clear all your dues or lose your land, the farmers are rudely told - Ajay comes up with a land-pooling plan for the purpose of maximising profit. It is a bit like telling a group of artists to abandon their own individual creative impulses and, under duress, pool their resources together to create one big, collectively owned piece of art for easy market access.

Young men have deserted Salamatpur in droves in search of jobs, but a winsome young lady, Jhumki (Anupriya Goenka), has opted to stay on. The daughter of a local trader (Brijendra Kala) who overcharges the farmers for seeds, fertilisers and pesticides, she is the reason why Ajay

postpones his suicide plan and gives life another shot. Mercifully, Mere Desh Ki Dharti does not throw in a romantic number.

The entire village, however, congregates on a farm and joins the two agents of change to belt out a celebratory version of the song from 1967's Upkar from which the film has borrowed its title. The unbridled jai kisan spirit of Mere Desh Ki Dharti takes a beating from the misplaced gung-ho timbre of the revolutionary zeal that is sought to be aroused among the dispirited farmers.

Divyenndu (Mirzapur's Munna Tripathi) and Anant Vidhaat (Mai's Prashant) shed their shady personas and put their best feet forward in the roles of the down-and-out engineers seeking a second chance. Anupriya Goenka, playing a trader's daughter who throws her lot behind the farmers, makes the most of a limited set of opportunities.

Inaamulhaq, a natural born scene-stealer, livens up the film when it flags. He thrives on the wisecracks that his character resorts to when he has his back to the wall. Cast as Pappan Khan's loquacious grandmother, Farukh Jaffer (in one of her final big screen roles) is delightfully insouciant.

For all the effort it makes to highlight the plight of Indian farmers, Mere Desh Ki Dharti is a largely middling, velvet-glove affair. It is occasionally aptly earthy but is mostly couched in ineffectual cliches. Mere Desh Ki Dharti could have done with a sharper, more corrosive edge.

Modern Love Mumbai Review: The Anthology Is Easy On The Eye And The Mind