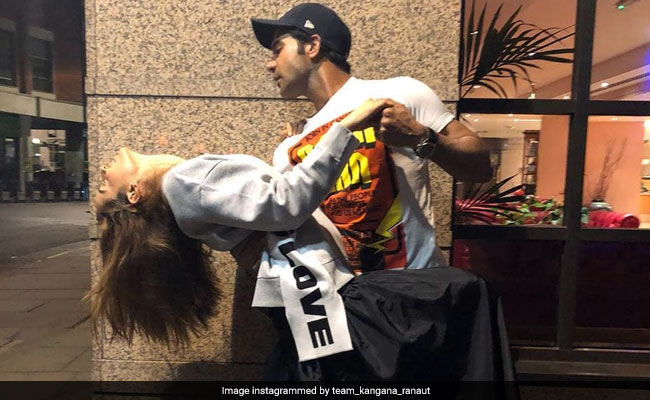 Team Mental Hai Kya wrapped shooting for the London schedule recently but surely the film's lead actress Kangana Ranaut is not done yet. Kangana Ranaut's official fan club shared a photo of the actress making merry at a restaurant in London. The occasion you may ask? The actress was celebrating the birthday of her stylist Sanjay Kumar with some other friends. Kangana's official fan club had earlier shared a photo which featured the entire team of Mental Hai Kya at the wrap up party of the London schedule. We also spotted Rajkummar Rao with the actress and both seemed to be having one hell of a good time at the party. Here are photos from Kangana's London diaries:

Just a week back, Kangana and Rajkummar Rao announced the release date of their filmMental Hai Kya in a typical mental style. In a quirky video, the duo dressed in retro look revealed that the film will release on February 22, 2019. "Two mentals coming together on 22.02.19. Mental Hai Kya releasing on 22nd February, 2019," the caption on the video shared by Balaji Motions Pictures Twitter handle read.

Kangana Ranaut and Rajkummar Rao have been sharing continual updates from the sets of the film. Be it their look from Mental Hai Kya or their post shoot fun, we have been a witness to what the cast of the film have been doing in the picturesque landscapes of London.

And they call her Sunshine! Ever so radiant #KanganaRanaut, on a shoot break. #MentalHaiKya #London #Queen #picoftheday

Kangana was having a gala timein London, chilling with friends and shopping amidst her work commitments. The actress was enjoying her feast with director Prakash Kovelamudi. And surprise, surprise... we also spotted television actor Saheer Sheikh with the group. Check out the photos here.

#Repost @kanika.d (@get_repost) Mentals night out... #Mentalhaikya #aboutlastnight @team_kangana_ranaut #prakashkovelamudi @ruchikaakapoor .. Let there be laughter in a glass of wine..let there be madness in the toffee desserts.. have a gin cocktail that makes u insane ...to find that one melody that keeps u sane!

Let's have some shopping smiles!! #KanganaRanaut spotted shopping in #London in between her #MentalHaiKya shoot. We say the breaktime is being perfectly utilized :p #Queen #shopping #shootdiaries #shootfun #shootlife #picoftheday

Rajkummar Rao and Kangana Ranaut were earlier shooting for the film with Amyra Dastur in Mumbai. Mental Hai Kya went on floors in May.